Running the 2016 New York City Marathon remains one of the most memorable experiences of our lives. And not just from those five hours we spent peeling our exhausted feet off of New York City’s blacktop. Part of what made finishing this particular marathon was what we had to do to get there. In reality, the time we spent preparing for this race went far beyond a normal six-month training period. In addition to that, we also had over a year of training for races that we ran just to qualify for the NYC marathon through the 9 plus 1 NYRR program.

New York Road Runners has built a way to get into the NYC marathon, the NYRR 9 + 1. Each year, in exchange for completing 9 NYRR races and volunteering for 1, you can qualify for the following years marathon.

If four of the five borough races you complete are “borough” races, you can also qualify for the following year’s New York City Half-Marathon, held each year in March.

The first year we tried the 9+1, we failed. We had a lot of personal things happening, and we just couldn’t get it done. It is a HUGE time commitment. The following year, we tried again, and succeeded! We decided to write up the entire experience, from start to finish, describe each race, and try to summarize what to expect if you are planning to participate in the program. 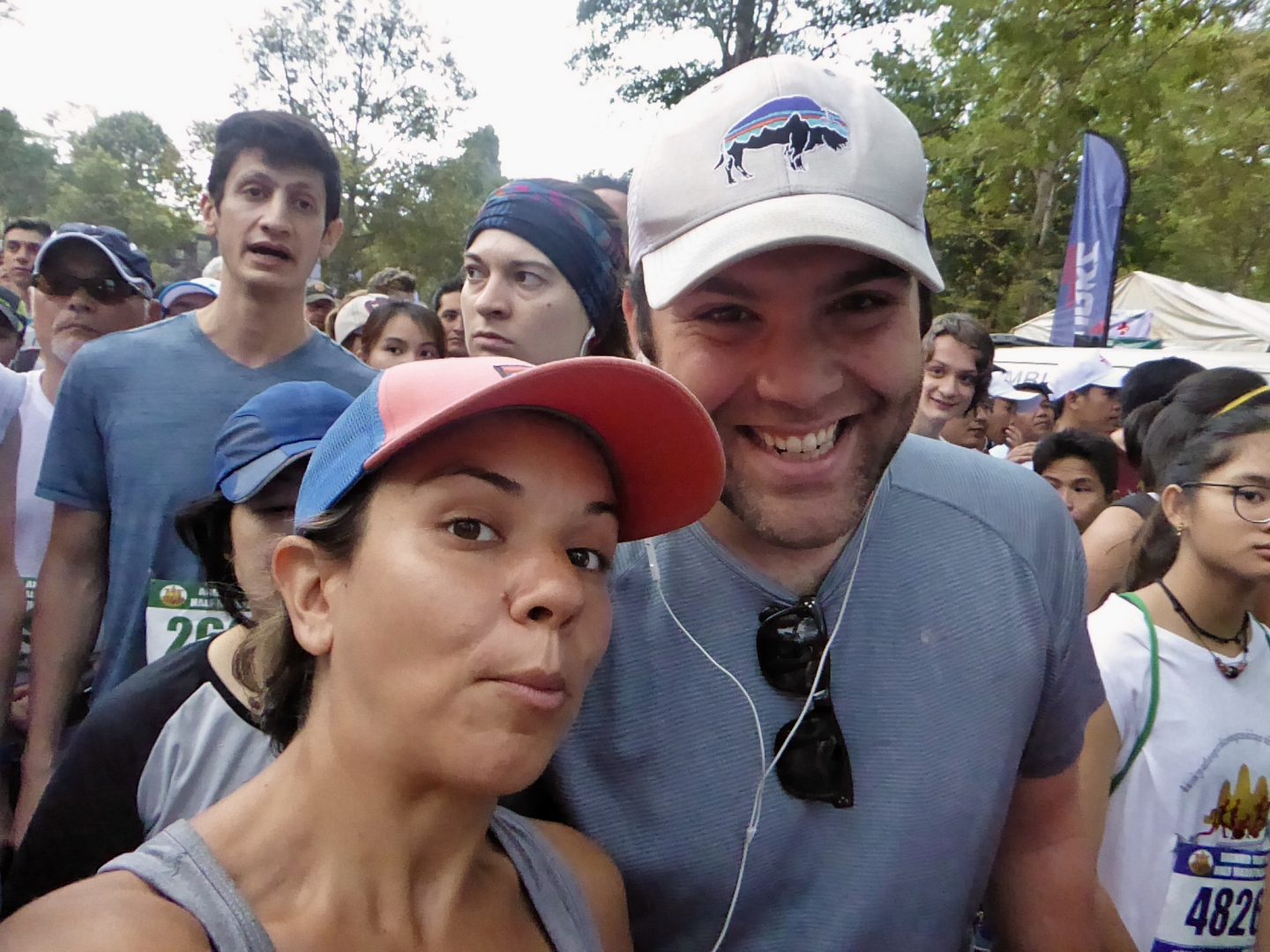 Hyping ourselves up before running a half-marathon

How to Qualify for the NYC Marathon (2018 rules)

The time requirements for the TCS NYC marathon are extremely competitive. The only people qualifying for this race are elite runners. For Joe and I, 30 and 31 respectively, we would have to run a sub 2:53:00 full marathon or 1:21:00 half-marathon to qualify in 2018. Seeing as how our PR for a full was somewhere around 4:21, this was not a feasible option for us.

The most popular charity to run with, Team for Kids, required each runner to raise $2,620 in order to be entered into the 2018 marathon. There are other charities available to run with, each with a different threshold for fundraising that you have to hit.

The route we chose! Run 9 races and volunteer at 1 for the New York Road Runners organization. 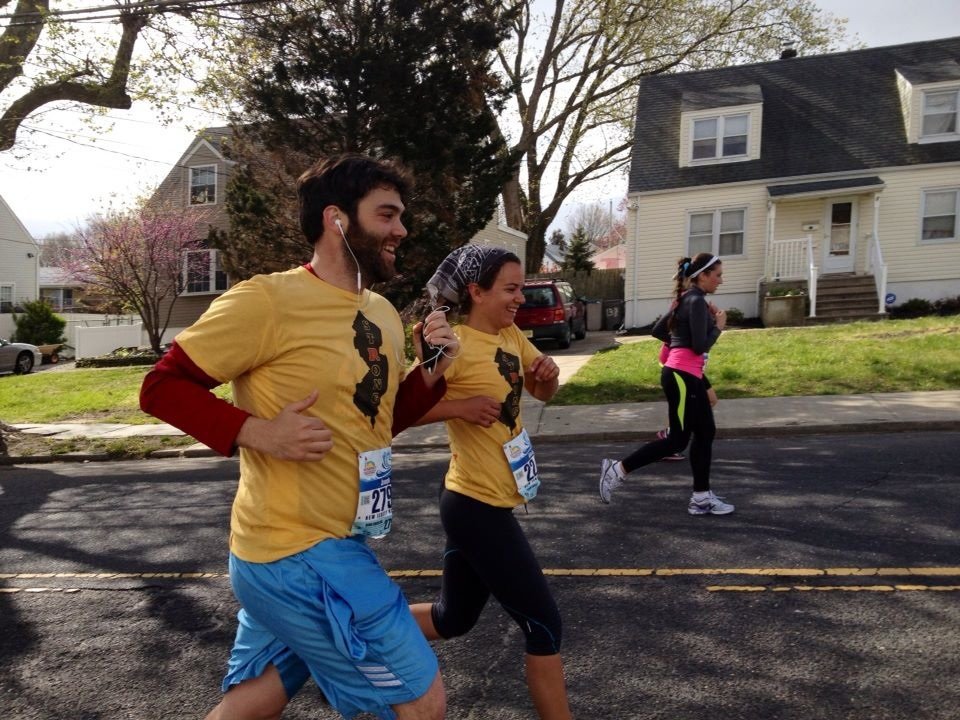 **Not all of NYRR races are a part of the 9 + 1 program, be sure to check the fine print of any race when you sign up**

This was a fun race, but don’t take its short distance as a sign of weakness. This 5K totally rocked us. Partially because we got weirdly competitive during it and went way above our trained race pace–this is still my PR for any race I’ve run 3 years later—and partially because it is surprisingly hilly. There are live bands every few blocks, though I always find focusing on the music challenging during races.

Held in the traditional Central Park loop that is familiar to all New York Road racers. The run is fun and laid back. Expect to see folks running in kilts and listen to bagpipes along the way. *Note this run is no longer available. Check out the SHAPE Women’s Half Marathon in April instead.

Run for the Parks 4 miler

I actually used to work for the organization that this run supports, City Parks Foundation. As such, I am naturally biased to think this is a great run. Held in Central Park, it’s not an easy course but a scenic one.  *Note this run is no longer available.

Run as One 4 miler

The most popular of the NYRR races, this one sells out almost immediately. Impressive considering there are 20K+ spots available. It is actually the largest half marathon in the U.S. The sellout is for a good reason, however. The Brooklyn half is a really fun race, with spectators throughout its entirety screaming their heads off. It’s also relatively flat, aside from one surprisingly intense hill in Prospect Park towards the beginning, and ends with a big party on Coney Island. Easily a favorite among New York racers.

Another popular race, this one takes runners through Flushing-Meadows Corona Park. This was not my favorite run, very few spectators and we happened to run on a hot day, but it’s not particularly hard or eventful either.

Another fun one, the Bronx 10 miler takes runners through a borough that is sorely under-visited and underappreciated, in our opinion. The course is relatively flat, and quiet. Not too many spectators come out for this one.

Many New Yorkers and tourists alike never visit the city’s Southernmost borough. Staten Island is actually cool, filled with great food, and a ton of green space. All that comes out in the half-marathon. The course takes you from the ferry stop, through the streets a bit, and loops back around along the oceanfront boardwalk for much of the remainder. There is one killer hill on this course–I was on track for a PR until I hit it–but it is otherwise a relatively flat route.

I love Christmas! So naturally, I also loved this run. People dress up and there’s hot chocolate at the end, what’s not to love?

Poland Spring Marathon Kickoff 5 Miler, held the weekend before the NYC marathon. It does not cost anything to volunteer with NYRR, and you get a free shirt! 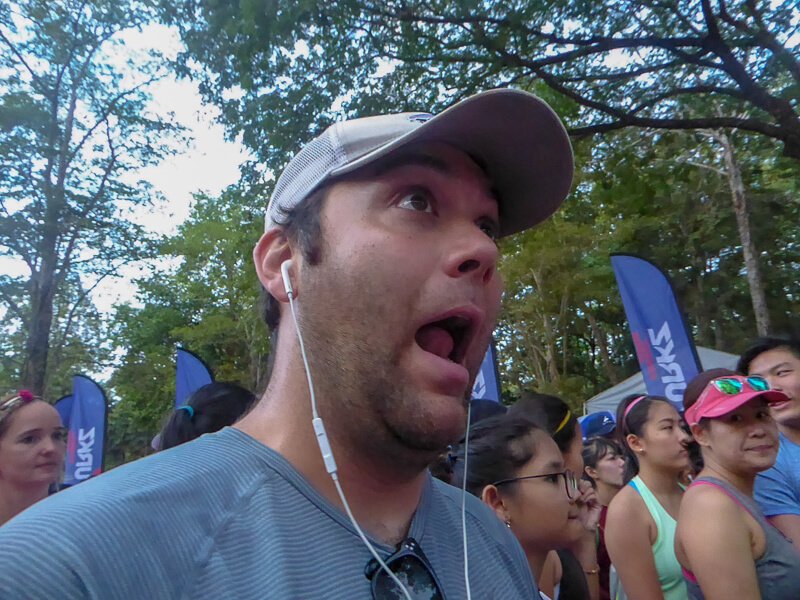 Joe hyping himself up for the run

We became NYRR members in 2015 which saved us a small amount on each race. The membership cost was $40/year. There are early bird prices for many races. For our cost purposes, we chose the cheaper registration cost of the two as that’s how we always registered.

*Note this total does not include the fee to register for the NYC marathon once accepted. For 2018, the registration fee is $295 for non-members, $255 for members, and $358 for non-U.S. residents.

62.8 miles *Does not include the NYC marathon itself, this is the total mileage, per person, from all nine races we chose for the 9 + 1 program.

I have absolutely no idea, but it was A LOT. Too many. Far too many. One of our favorite training runs, though, was this 20 miler through Manhattan.

In the end, what was our experience? We absolutely loved running in the New York City marathon. For us, this was always the goal, long before we ran our first full marathon. However, I do not think either of us would do the 9 + 1 program again. It is really time-consuming, exhausting, and forced us to do a lot of races that we otherwise would not have been interested in.

The program did keep us running over a three-year period, but that feels excessive just to run in one race, no matter what it is. The frequency of training runs kept us from being able to do any other types of workouts or participate in anything but running. Our weekends were consumed with training runs, and our schedules revolved around races.

For us, it was simply too much.

Not to mention it was an added expense. While we were able to afford it, it bothered me a bit that the only way to participate in the marathon is to be an incredible athlete, to invest hundreds of dollars in the 9+1 program, or to raise a huge sum of money for a charity. It felt like it catered more towards people with the income to run it.

All in all, we are grateful to have done the marathon, the NYRR races are extremely well managed and organized, but we would not do it again. For other people we knew, they loved the experience of having a full race schedule throughout the year. Even as devoted runners, we simply got tired of all of our time being tied up with training and race events.

Interested in participating in the 2019 NYRR 9 + 1 program for entry into the 2020 NYC marathon? They have all the info listed on the NYRR website.

At this time, NYRR has not yet released the 2019 race schedule. 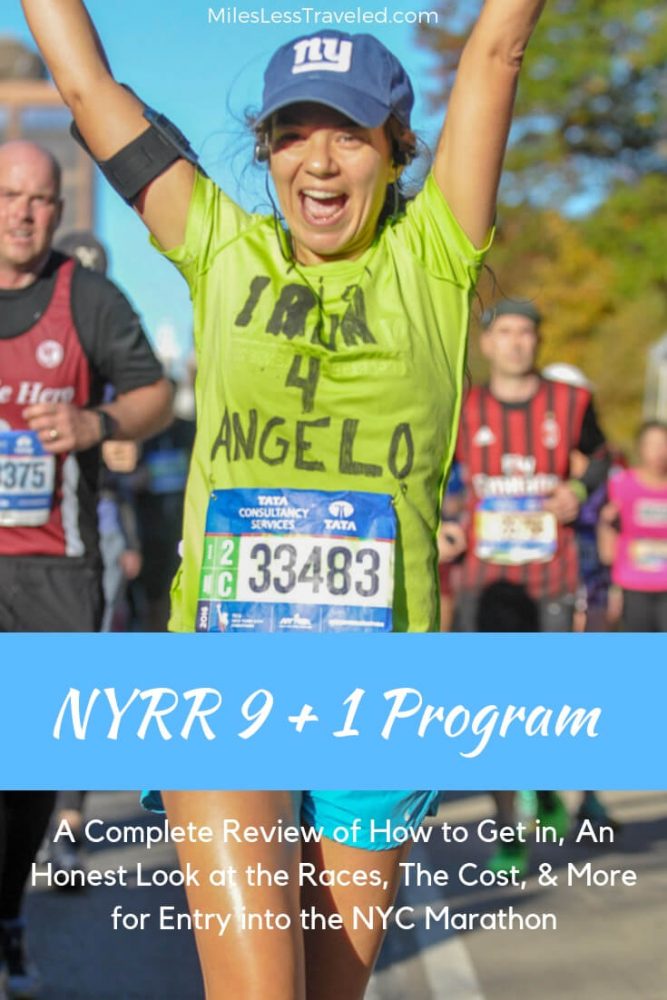