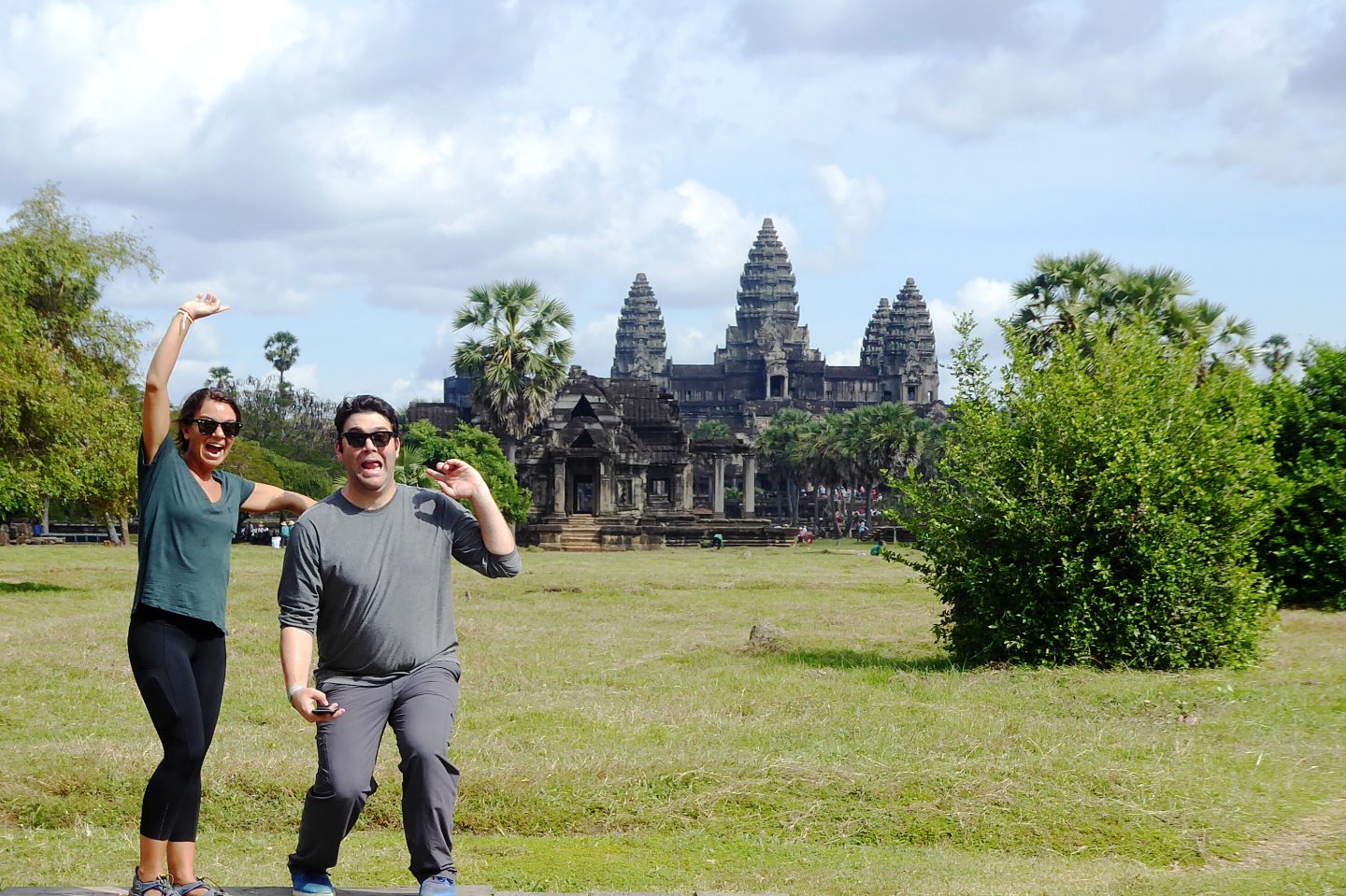 Life has a funny way of working out. This trip of ours took years of planning, and most of the time, this meant complete flexibility while traveling. Avoid booking flights, hotels, or anything else that would “limit” our freedom. However, there was one thing we did plan fully. Running in the 22nd Angkor Wat International Half-Marathon.

Note: Just because we’re poor planners does not mean you have to be! Our friend over at World Smith has an awesome post breaking down expenses for a trip to Cambodia to help set a budget for yourself, see this super thorough rundown of accommodations in Siem Reap, or check out a complete and comprehensive guide to 3 days in Angkor Wat.

Now, getting me (Joe) to sign up for this was no easy task. To put it lightly, I sweat more than your normal human being. So the thought of running 13.1 miles in Southeast Asia where temperatures are routinely in the 90s with 90% humidity? Not my ideal running weather. That being said, a lot of research was done to ensure my safety. So December 3, 2017, we knew we had to be in Siem Reap, Cambodia.

Having run roughly ten half-marathons between the two of us, we felt informed on what we needed to do to be prepared. Unfortunately, we had been traveling for nearly two months before this race, so our training regimen was not as strong as we’d like. In fact, we had a two-week layoff in Indonesia, once again, not ideal for half-marathon training. We made sure to get to Siem Reap a few days early to ensure we were not jet-lagged and ready to go by the 3rd. 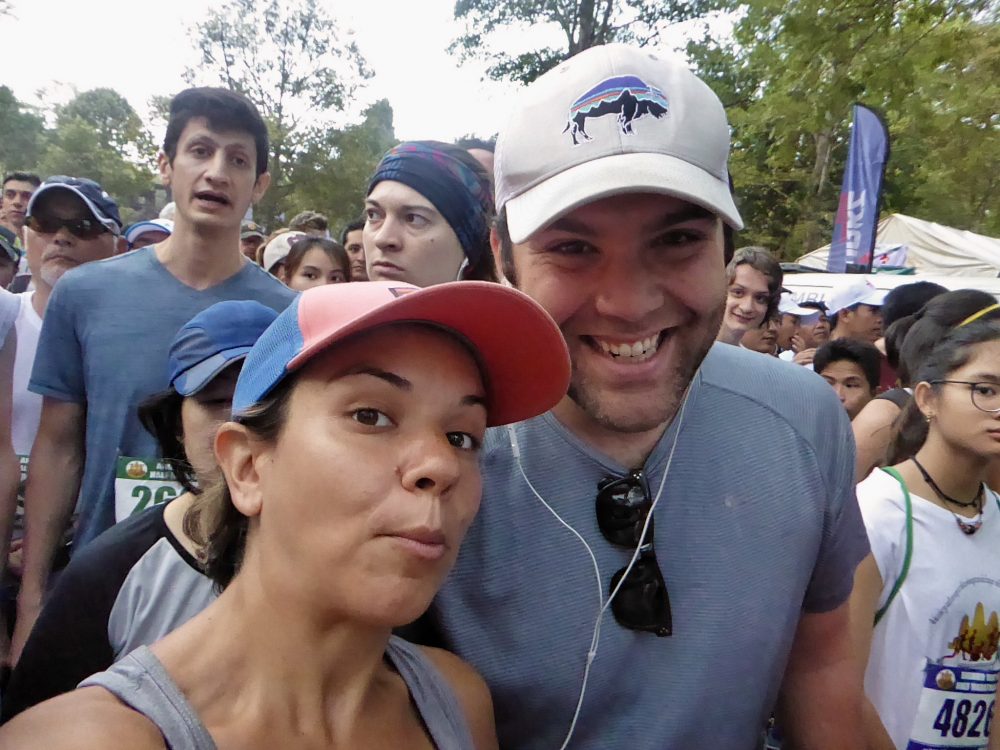 Obviously, a PRE half photo as we look fresh and ready to go.

A Few Notes About Siem Reap:

Not the ideal setting for pre-race needs. You cannot drink tap water. High carb options tend to be white rice–which is obviously fine–but the traditional pasta that most runners go with is not super prevalent. It is expensive but it can be found.

You are in Cambodia, you will want to eat street food while walking around. Be conscious and know your own stomach! This is hard to do because of all of the delicious smells, but it is a must as you do not want to be stopping for bathroom breaks mid-run. We had a hard cut off of no street food two days before the race to try to avoid any potential mishaps.

Fortunately, this run started at 6:00 am to limit the heat during the run. We set our alarms for 4:00 and off we were. Siem Reap is a traffic filled city, so we made sure to leave early–5:15 AM–to make sure we got to the start for 5:45. However, something we did not think of, Angkor Wat is incredibly popular at 5:30 in the morning. Why you ask? Sunrise views of the temples of course!

Stressfully in our tuk-tuk, we began to freak out wondering what time we would make it to the start in time. Before we know it, we were stuck in bumper to bumper traffic and were still two kilometers away. Yikes. Luckily, we hopped out and started walking to avoid the traffic, this was the right call as there was a single lane tunnel causing most of the traffic ahead of us. After that, there were open roads so we hopped in another tuk-tuk and got to the start right at 6:00. 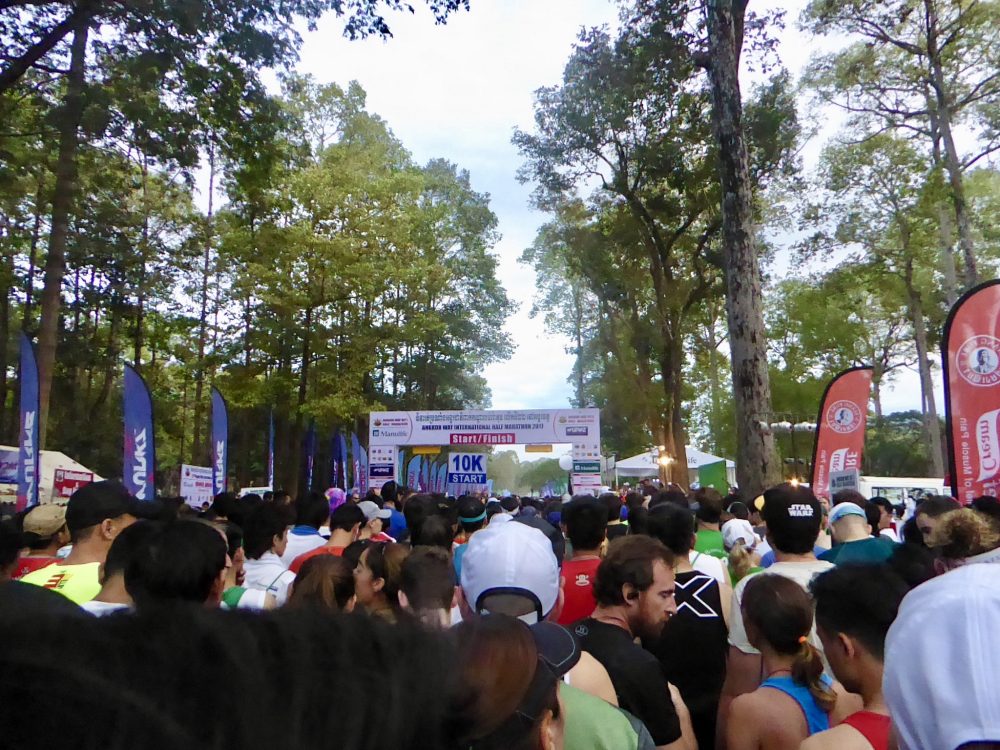 To start or not to start? That is the question

6:00 AM! Let’s do this! Not so fast my friend. We are on Cambodia time, which means this was not starting for a while. Announcements were made over a loudspeaker but they were either in Khmer or we could simply not hear them. We stood in an overcrowded start for a half-hour until the race finally began. When the race started, we were both incredibly excited but we had to be smart as we were not used to this heat. The race itself was pretty uneventful–I did fall one time but what’s new. For the most part, we took it easy so there was no major struggle until the last few kilometers.

For people going to Siem Reap in December, this run is an incredible experience. The ability to see the temples in this way is a once in a lifetime experience. I would even travel out-of-the-way to do it if it’s at all an option. From what we heard, the course changed in the past year, and there are less temples on the route which is a bummer. However, it was changed to increase shade coverage, something we were pretty grateful for.

Very important note. This would NOT stop us from going to see the temples on your trip to Siem Reap. Angkor Wat is in the background, but this does not give you the same experience as going through the full visit. You MUST still go get a day/three-day/week pass and see the temples properly.

Overview and Logistics of The Half-Marathon

The course was a typical down and back, with KM markers throughout and water stations every 2 KM. 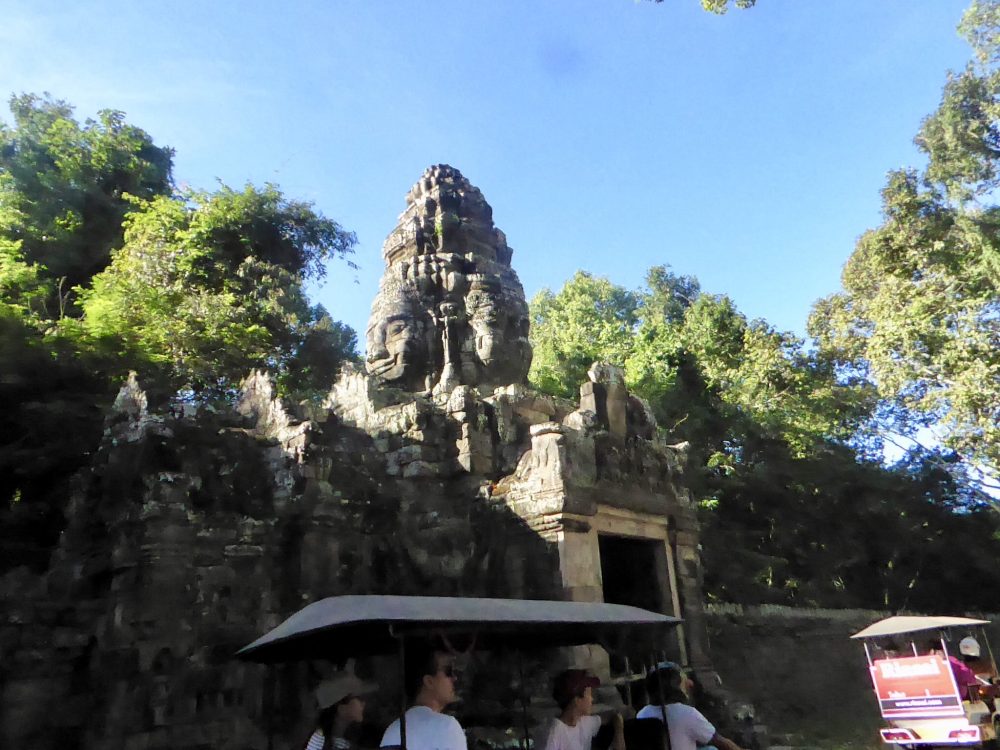 We stopped more than we could count because of all of the incredible temple views.

Temples: There are views throughout around half of the run. Very easy to stop and go take pictures.

Shade Coverage: It is better than you think–still incredibly hot but the shade helps.

Little High Fives: Small children that are so excited to give you high fives, we needed it!

Flat Course: Little to no incline throughout the run, nice and flat to get a good time if that’s what you are going for. 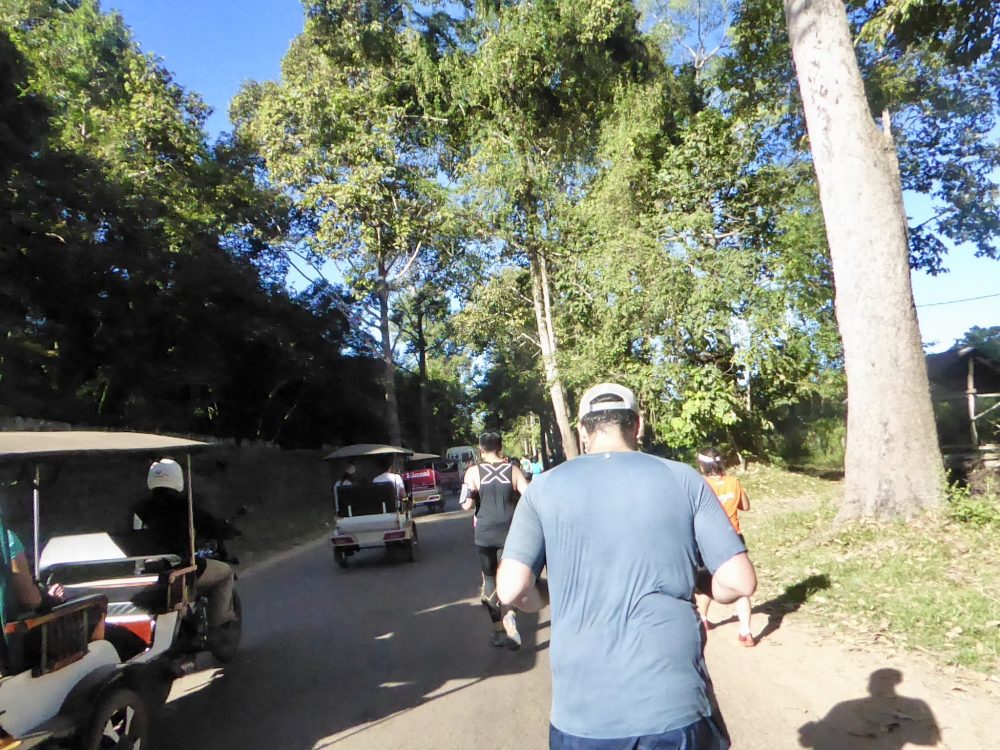 A typical view of managing tuk-tuk traffic and exhaust during the run.

Disorganized: For the most part, this is not a problem, but there are certainly things that were more confusing than they should have been.

Temperature: So hot. So much sweat.

Traffic: This was probably the biggest issue, the course opens up to the public about halfway through. Which meant tuk-tuk and car traffic–exhaust fumes–everywhere. Not ideal when you are breathing heavy.

Overall: We loved it, and would recommend it. It is a really unique way to experience the temples, and forced us to just slow down and enjoy the run.

Want to know what we packed for this and the rest of our 5 months abroad? Check out our complete packing list here, or get your very own 2 weeks in a carry on checklist. 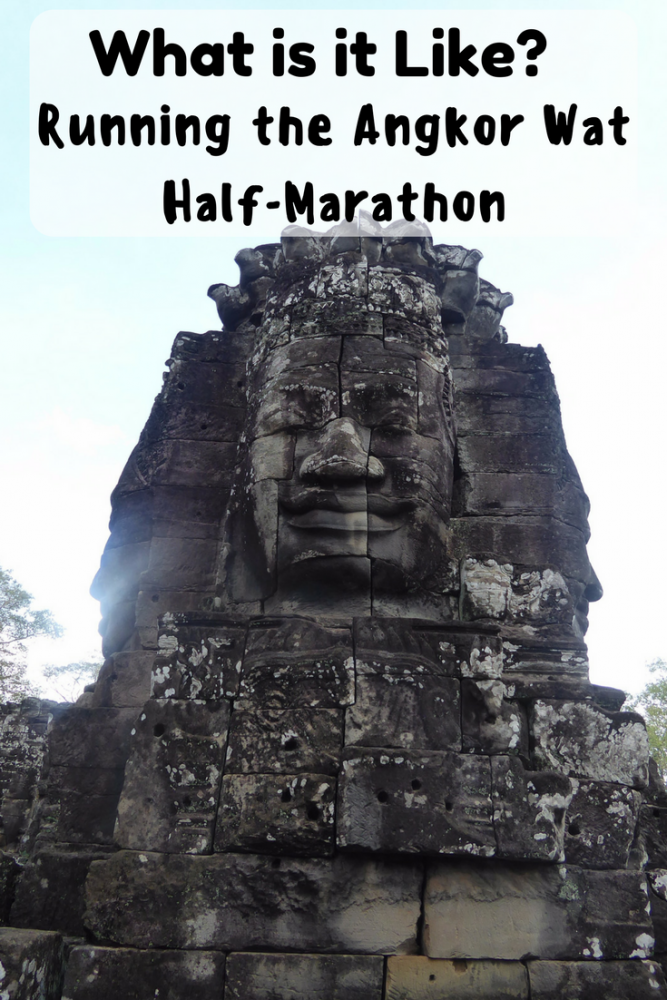