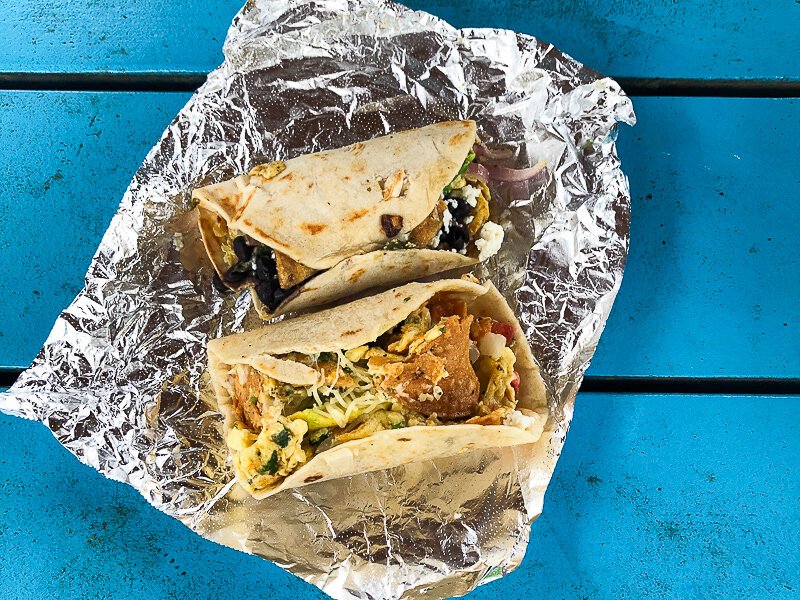 There is something about eating tacos that begs for the sticky, sweet air that only comes from heading South. Sweating through each delicious bite while somehow trying to balance the incessant heat of the chili sauce is a right of passage. This is not for the weak.

Enter our most recent experience in this setting. It was nighttime in downtown Austin. The bats had already blacked out the sky, leaving the hundreds that watched them from the bridge, the riverbanks, and various floating vessels on the water in quiet satisfaction, dispersing to their predetermined dinner destinations.

We had, of course, been drinking. And so it was that we found ourselves taking in a Lyft for a 10-minute drive outside of downtown Austin to a little taco stand nestled in a residential area. The kind woman working the cash register smiled, a bit tightly perhaps, as I made poor attempts to practice my neglected Spanish vocabulary. It was here that we found our favorite tacos in the city. 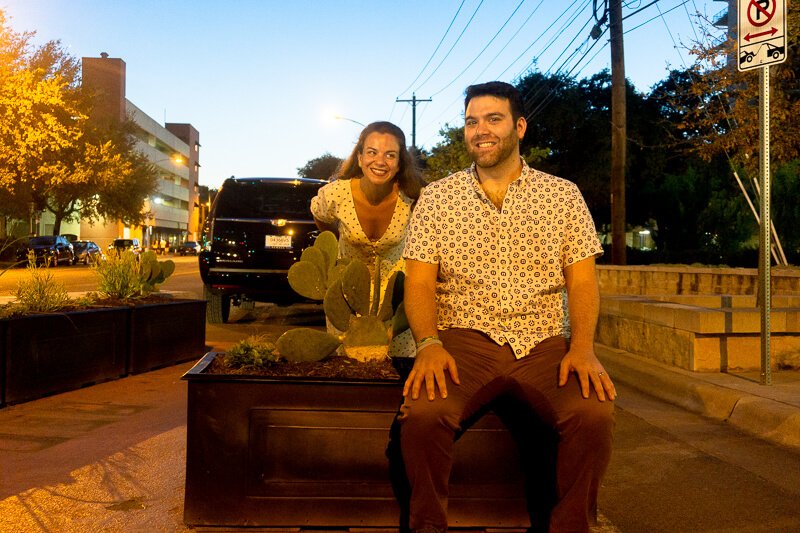 We knew before we bit into them that these were The Ones. As we sat at a chipping picnic table, once painted forest green but that was now a worn brown, the feeling settled in. We were about to eat some damn good tacos. The flaky yet cohesive form of the homemade corn tortilla encased chorizo so tender and full of flavor that we questioned whether we had ever actually eaten the Spanish sausage before.

Proceeding to inhale them in a way that probably shocked other taco-happy patrons, we happily slopped sauce on our cheeks in an effort to cram in as much taco as possible in each bite. Lonestars be damned, our taco crushing extravaganza had nothing to do with the beers from earlier. This was pure, unadulterated, taco LOVE.

This, of course, was one of many such incidents. If you follow us on Instagram, you are well aware of the gross overconsumption of tacos we participated in while visiting Austin in September.

We decided to share with you not only our favorite spot outlined above but also the others, with a newly created ranking system: the MLT Noodle Score.

Ranging from 1 to 5, with 1 being don’t stop here unless it is literally the only option for tacos and 5 being drop everything you are doing and go here right now for tacos–seriously, get on a plane and go eat a taco RIGHT NOW.

The glorious food truck scene in Austin is one of the main reasons we keep returning. Cheap and delicious, casual and friendly, it has all the components that make up our favorite eating style.

Many are taco trucks, as mentioned above, but many are not. The variety of it is awe-inspiring, really. If you are interested in sampling the best food this city has to offer on a budget, head to the outskirts and pull into every parking lot you see that has a food stand or truck plunked down into the middle of it. If Austin is just one stop on a long journey through the lone-star state, you’ll need a full Texas Food Guide to help you along the way.

A few caveats before we enter into the very passionate and controversial world of taco ranking in Austin.

-We are aware that we may not have ordered the right thing at any given spot, rendering our opinion negative when it could have been positive.

-We are not from the city, nor do we intend to be, however, we eat a lot of f*cking tacos. We trust us and think you should too.

-Lastly, it’s really hard to have a bad taco. Any taco, any time, anywhere is better than no taco. When in doubt, always choose taco over no taco, even if it is not the best version of a taco.

-What is this Migas we speak of many times over in this post? Migas means different things depending on where in the world you hear it. In Austin, migas refers to the Tex-Mex version of the dish, eggs scrambled with corn tortillas, usually served for breakfast. There are many varieties, in tacos and not. Obviously, as this is a tacos post, we are referring to the tacos.

-This guide to Austin tacos is by no means written by experts, or even locals, but as this is our third trip to Austin, we no longer felt right withholding all the juicy insight we’ve gained into the Austin taco scene.

This is the first of what will be many ranking posts moving forward using the very important and well regarded MLT Noodle Rating. 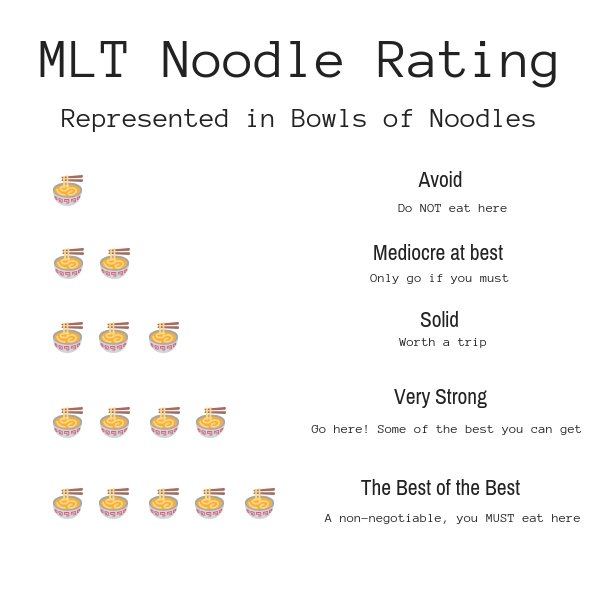 Here is the official MLT ranking, starting with the lowest and working its way up to our all-time fave, for five taco spots in Austin, Texas: 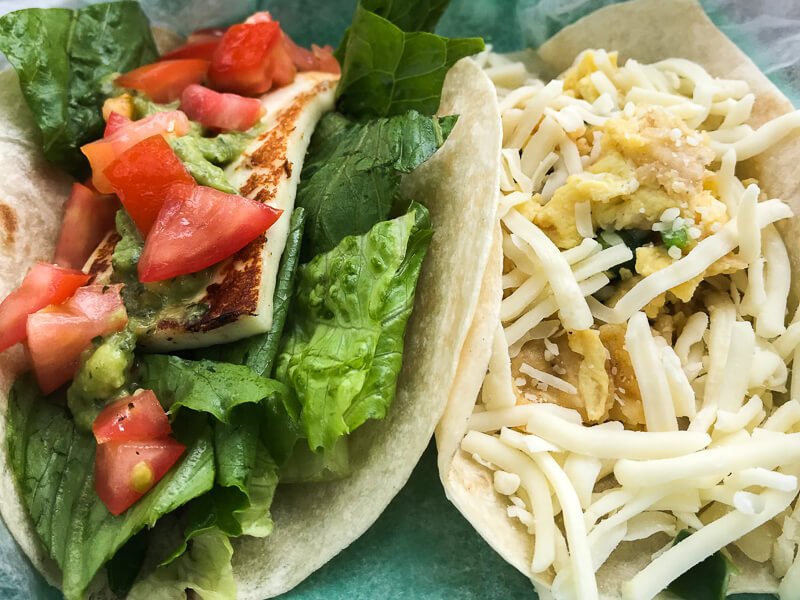 This is one of those aforementioned spots where I do not think I ordered the right thing. However, I can’t see how these could have gotten that much better. The tacos were more, “mom made tacos with a seasoning packet and threw cold shitty cheese on it” than anything else. There is a lot of hype around this place, and they’ve been able to open ten locations throughout Texas. How remains a mystery. Adding insult to grave injury, I (Alicia) waited 40 minutes of could-have-been-eating-real-tacos time for these.

The Heather – Grilled queso fresco, black beans, guac, lettuce, and tomato vegetarian taco. This was better than the disgraceful migas, but not by much.

Migas – You call this a migas! The corn tortillas were undetectable in the egg scramble and the cold, tasteless, shredded cheddar on top was unpalatable at best and downright gross at worst. 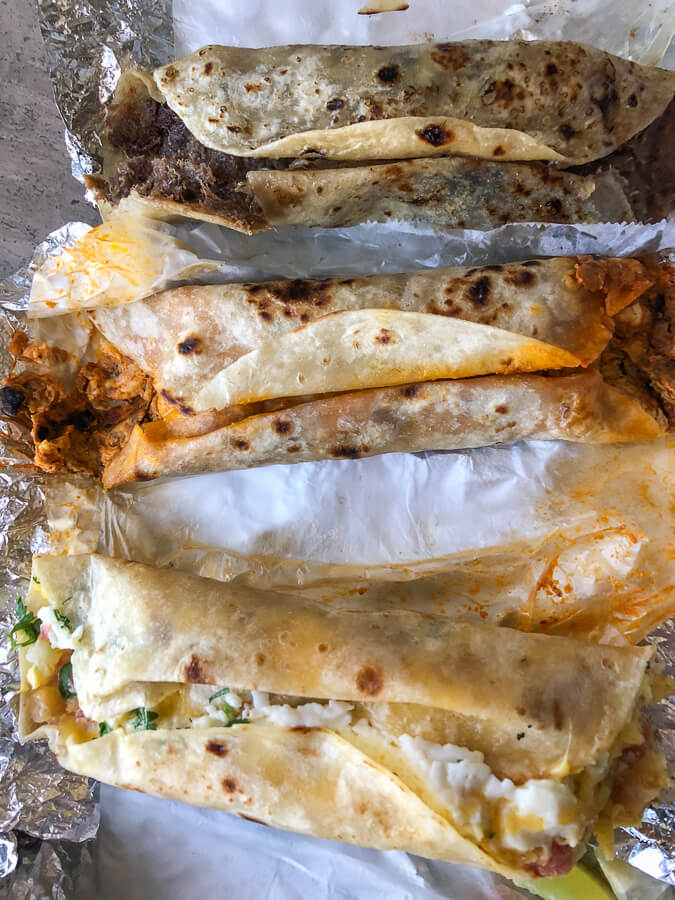 This was our first stop in the city for our third trip out and it was a matter of convenience. Our flight had landed late the night before and we were tired. So, obviously, we rolled out of bed and into the nearest taco spot. The Taco Joint was a little roadside restaurant that was pleasantly busy when we got there. We tried this twice during our 5-day visit, and both times it was consistently OK. Overall, the tacos are pretty good by universal standards, but not necessarily by Austin standards. It was worth it for convenience factors, but not worth going out of your way for.

Barbacoa – This was our least favorite. A wad of meat in a tortilla, and not in a good way.

Soyrizo and Egg – While Alicia eats a little meat when she travels, she’s mostly a vegetarian. Austin really caters to that, this was the first of many vegetarian eats. We thought this was a very solid taco, worth trying!

Migas – Pretty good migas. The eggs were good but the ratio of egg to tortilla was off. 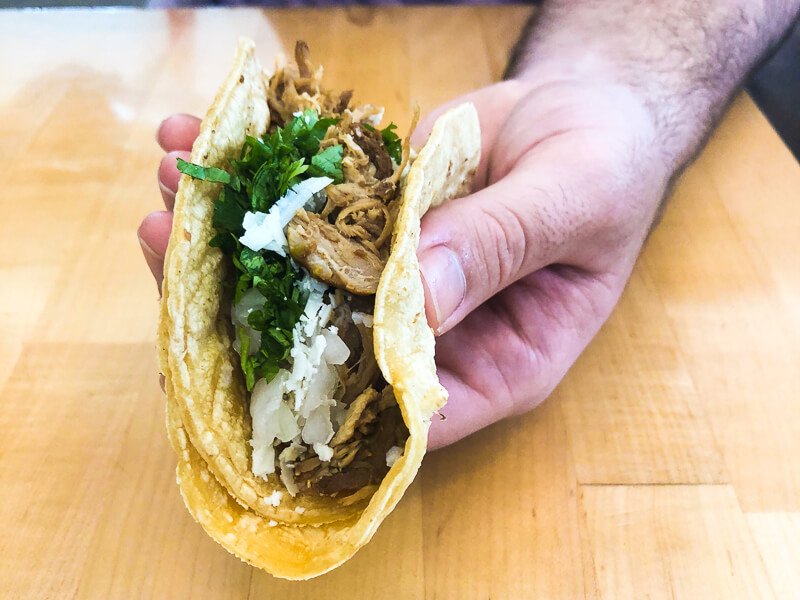 This was not our first time at Torchy’s. This is arguably the most famous taco brand in Austin, at least to tourists, and it feels like it. Torchy’s can be found in 12 Texas cities plus a smattering in Oklahoma and Colorado. There are 15 locations in Austin alone. The company is cool with an interesting background, but every time we’ve eaten here we find ourselves wanting to like the tacos more than we do. Don’t misunderstand us, the tacos here are good, but we just don’t think they’re worth the hype. Overall, this is a “must-try” if you’re into checking off lists and want a pretty tasty taco, but if you’re more into eating the best tacos, it’s an easy skip.

Independent Taco – Vegetarian taco. It was ok, probably the least tasty of the three we sampled.

Crossroads – Brisket taco. Again, it was just ok. It might be personal, we found that as much as we love brisket and tacos separately, we may not love them together.

Green Chile Pork – Pork taco. Now THIS was a taco, the best one we’ve tried from Torchy’s. The meat was tender and a perfect match for the cheese and homemade sauce. 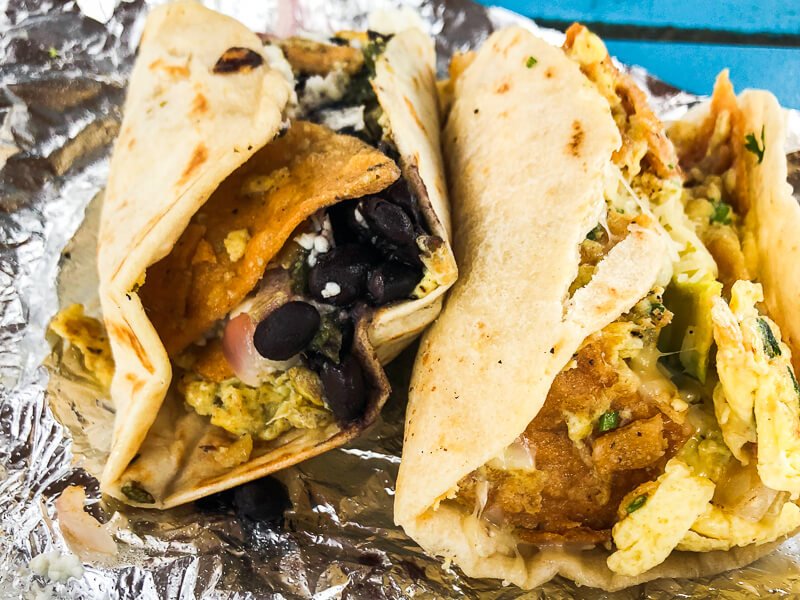 Not exactly a secret in the Austin taco scene, you will likely spot Veracruz on every food list that the internet has for the city. While we tend to be skeptical of these super hype food stands, Veracruz is well worth it. The food here has been consistently good both times we visited on two separate Austin trips. If it weren’t for the ever-constant pull of our curiosity to bring us to new places, we’d just eat Veracruz migas tacos for breakfast every day in Austin.

Migas – The best migas! Which means the best breakfast. Scrambled eggs with the perfect ratio of corn tortillas, topped with avocado and onion.

Migas Poblanos – A play on their traditional migas, this one adds in queso fresco, beans, and poblanos for a very hearty and delightful taco. 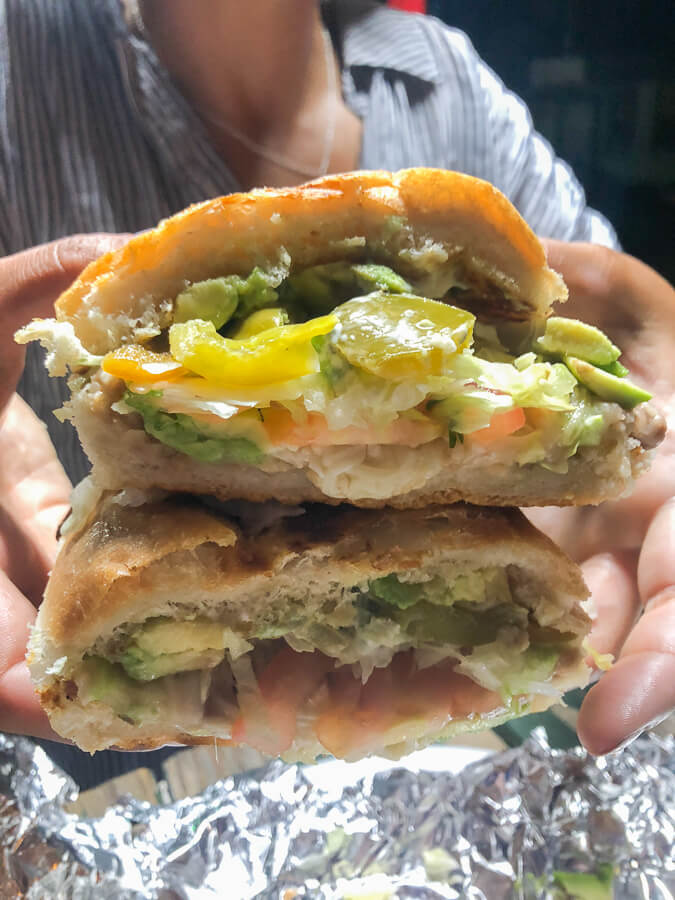 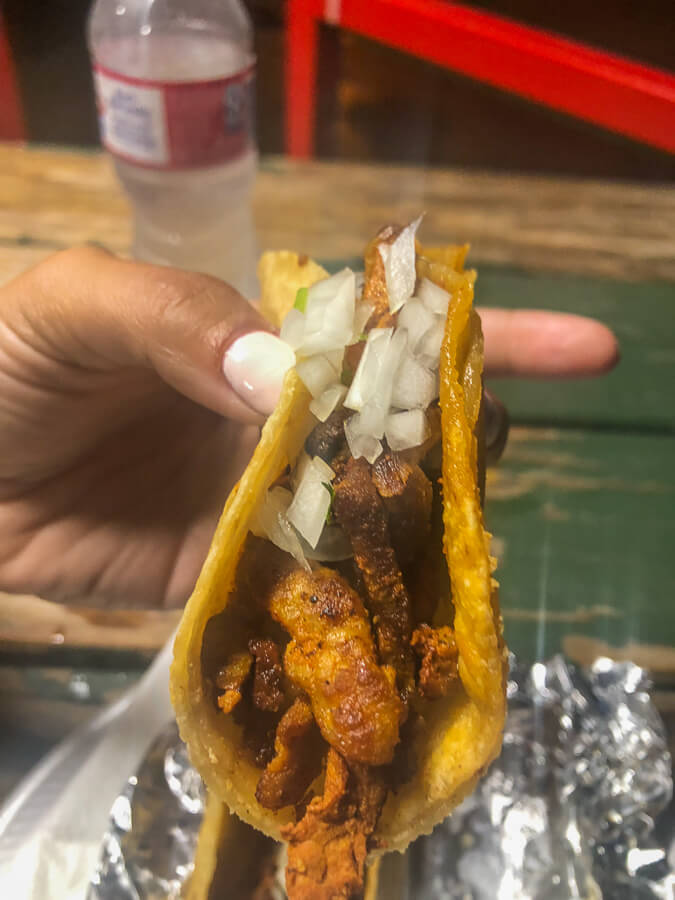 This was a new addition to our taco circle, coming in HOT at number 1. We loved absolutely everything about this place. From the only Spanish speaking crew to the quiet, residential location in East Austin, there was a different feel here. The patrons talked quietly, we think likely out of a hushed reverence for the tacos. The chorizo was our favorite, though we enjoyed every bite of food we ate here.

Chorizo – Our number one favorite taco we’ve had in Austin. This was different from any chorizo we’ve ever had but in all the right ways.

Al Pastor – The meat was seasoned and sliced perfectly. Just enough of the double corn tortilla to support the meat. A GREAT Al Pastor taco.

Vegetarian Torta – This was huge and delicious, but very replaceable with the other, better tacos on this list. 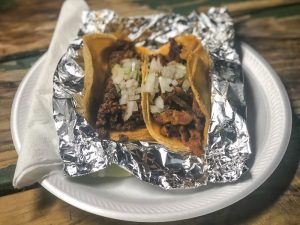 This was truly something special. And I (Joe) legitimately may get a chorizo taco every single time it is an option. I love them. This chorizo had different spices than I have ever had before. It was delicious and a must-eat in Austin. 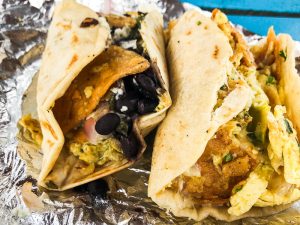 The breakfast taco is, in our humble opinion, a very underrated taco. In Austin, it gets the hype it deserves. The breakfast taco is a serious competition here, with the best of the best taking on a cult-like following from the locals. The types vary, but after several tries of many different kinds, the migas takes our vote without questions. And the best migas we’ve had is at Veracruz.

Finding tacos in Austin is easy, and finding good tacos in Austin, is still easy. However, if you want to find these Austin tacos, download the taco finder map below. 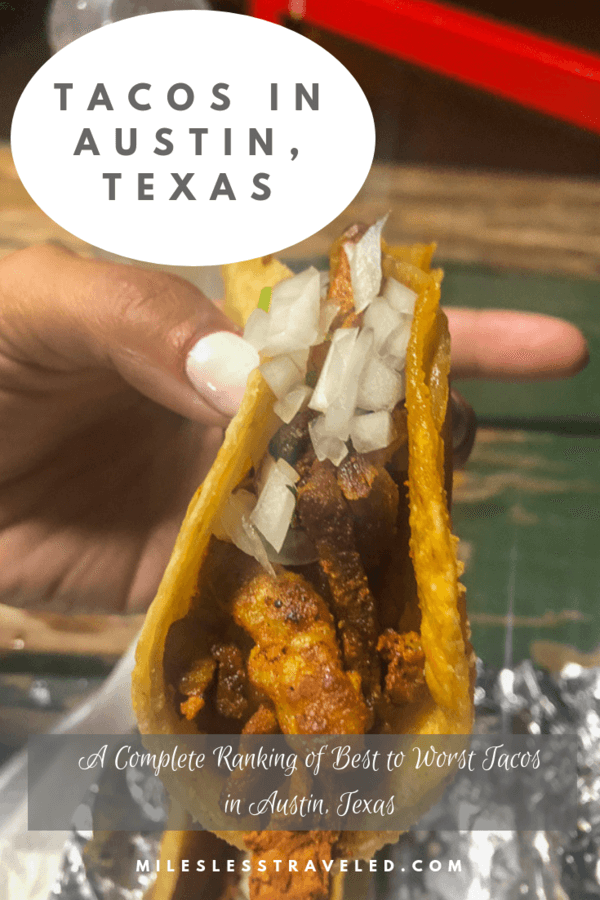