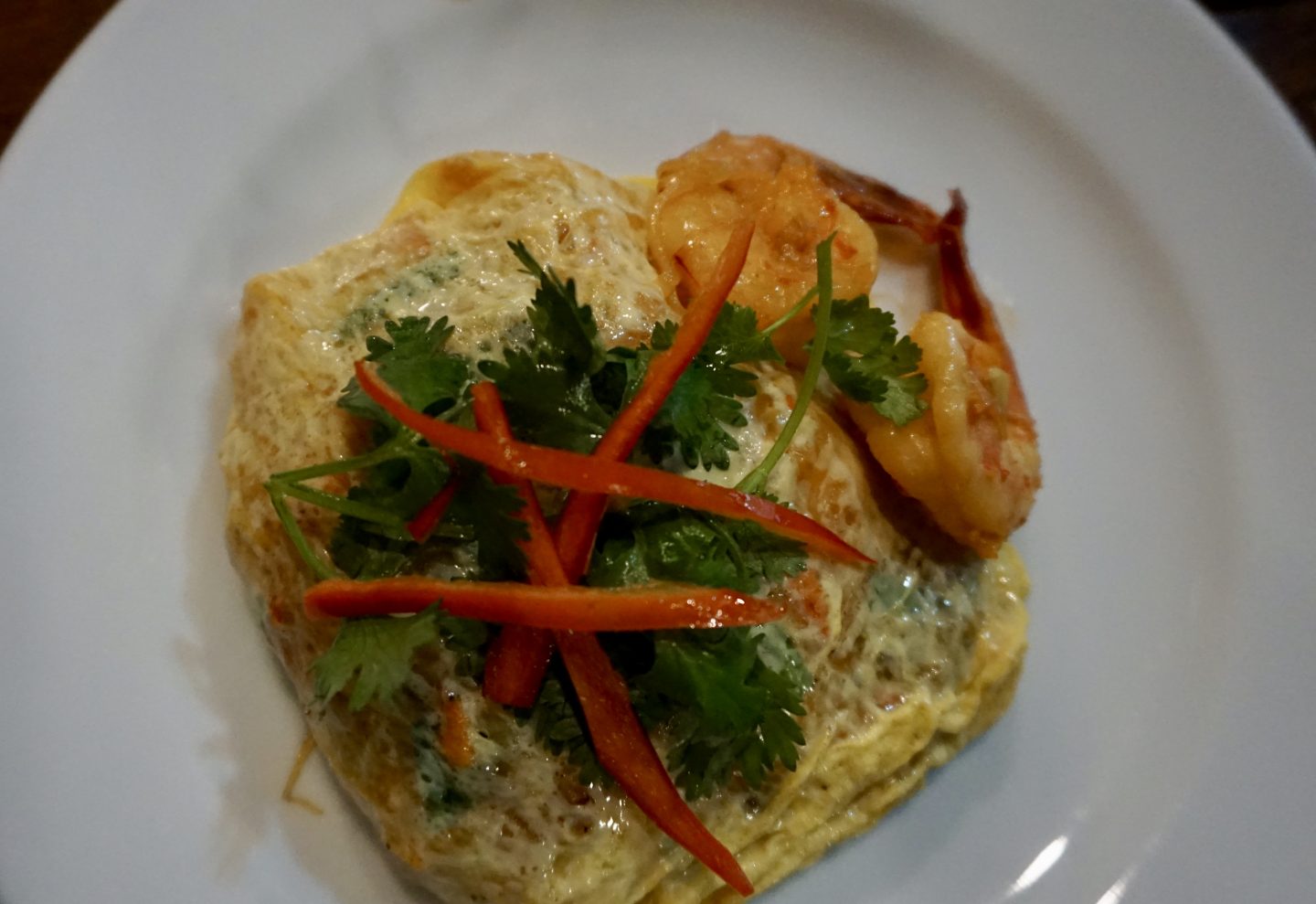 For anyone who has read a post on our blog by now, it should be pretty obvious that Joe and I are more than mildly obsessed with food. It’s a hug part of our lives, our marriage, and our travels. It may come as a surprise then that before Vietnam, we’d never scheduled a food tour.

Due to images of giant buses filled with loud sweating tourists, we had both shied away from taking tours. Turns out, they’re not all like that, and we’ve been embracing it more and more on our round the world trip. After the great experience we had in Saigon, we vowed to make food tours a regular part of our travels. 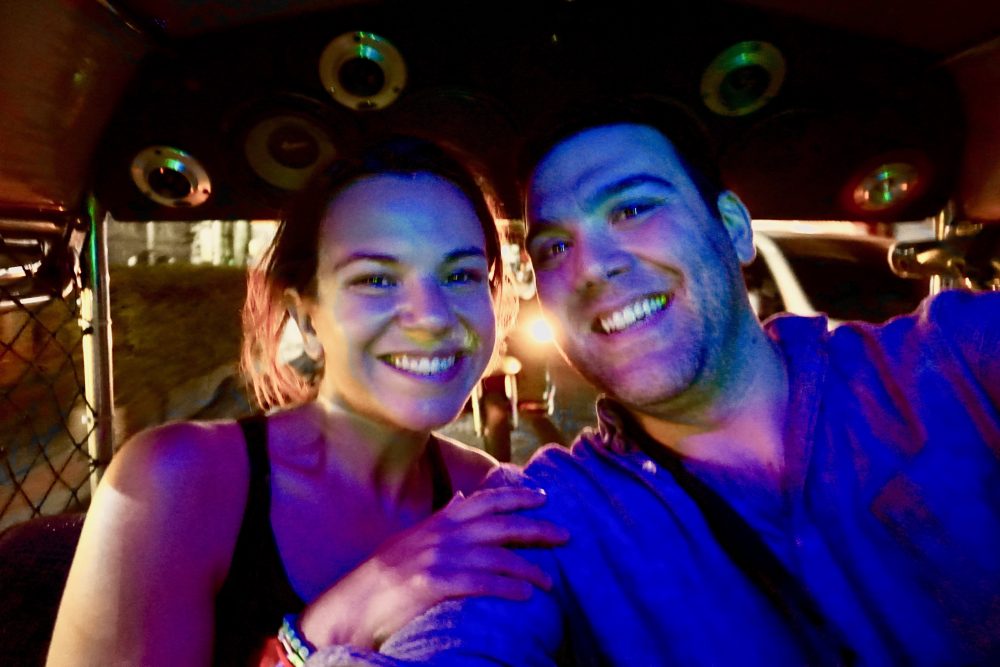 Hopping between food spots via our tuk-tuk.

When we reached Bangkok, a city that has a reputation for having the best street food in the world, we decided to continue the trend. After a bit of research, we went with Bangkok Eats Midnight Food Tour by tuk-tuk.

We met our guide, Olive, at the entrance to a metro stop along with 12 other hungry folk and hopped in our chosen tuk-tuk to start the route. The night before, Joe and I had walked past a restaurant broiling catfish in an outdoor oven and sadly looked on at the happy diners eating delicious looking food that we were too full to eat. As luck would have it, this was our first stop.

Turns out it serves northeastern Thai food, and it is AWESOME.

All the food was served family style, so we set up at a table for 14 and passed the dishes back and forth. The first item to hit the table was a green papaya salad — a very popular dish commonly seen from Bangkok street food vendors. Spicy and sweet, this was Joe’s favorite. Next we sampled Tom Yum soup, a savory chicken soup boiled with tomatoes and vegetables served up alongside a plate of sautéed pork.

However the real star here was the catfish. Coated in salt and broiled at high heat, it is then picked apart, ground, and reformed to be deep-fried. This was my favorite dish at this spot, I couldn’t get enough of it. My stomach had slowly been adjusting to Thai cuisine (to be honest it never fully adjusted), and I had vowed not to overeat on this tour to avoid antagonizing it. That went out the window REAL QUICK when I bit into that catfish. Crumbly and crispy, slightly sweet when accompanied with the mango sauce served on the side, while at the same time savory and salty. I could not get enough of this. 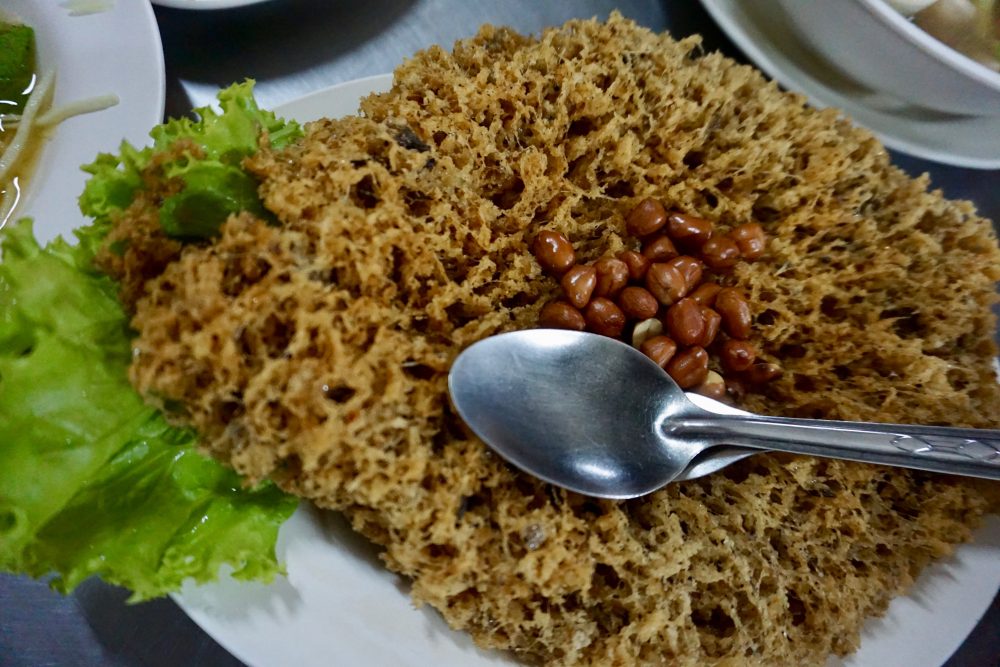 We clambered back onto our tuk-tuk and sped off to our next stop: the infamous Chinatown.

This neighborhood essentially started street food in Bangkok. Chinese immigrants had been settling regularly in Bangkok before it was Bangkok and heavily influenced the cuisine here as well as the people. It is said to be one of the largest Chinese communities outside of China itself. As soon as we stepped onto the streets, our senses were overwhelmed with flashing neon signs, smells of all the good, the bad, and the ugly, and the sticky heat of too many people and gas burners crowding the streets. We immediately loved it.

Olive started us off with the best buns shop in the city, according to her. The BBQ pork buns were pretty mediocre, we weren’t really excited about them. What surprised us was what came next: hot custard lava buns. Let that sink in for a minute. The traditional bun mixture made up the outside of a steamed vanilla custard that oozed out of the sides and slightly burned your mouth when you ripped into it. We politely shared one, then immediately asked for another. This was our favorite thing we ate in Bangkok, and Joe’s favorite dessert of Asia (my heart still loves the sticky rice cakes of Kep first and foremost). We did not eat too many desserts in Bangkok, but they are rumored to have great chocolate shops if you’ve got more of a sweet tooth.

Next up was a corner cart across the street. This little metal cart has been serving food for over 50 years and several generations. Olive quickly delivered a steaming bowl in front of us with a straightforward warning: this soups’ spice is no joke. Doused in white pepper, the hot liquid broth hit the back of our throats with a force that sent us into a collective coughing fit. Floating in this delightful liquid were chunks of crispy pork belly and thick, rolled noodles made of tapioca flour. It was just marvelous, and we happily choked and slurped up every bite. 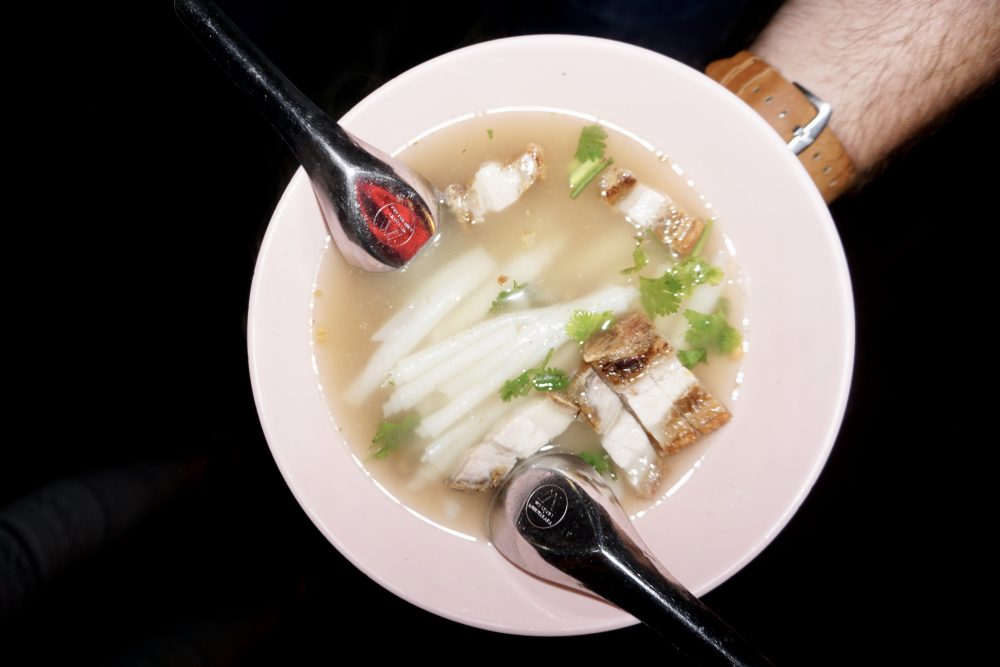 The white pepper soup with crispy pork belly and tapioca noodle from Chinatown.

As this tour is 4 hours long, we gratefully accepted a break from the food stops and headed off to the famous Bangkok flower market.

Located on the other side of Chinatown, the market is HUGE, the largest in Thailand. It offers up both wholesale and retail options at incredible prices. We saw a bouquet of Orchids for the equivalent of roughly $4 US.

Nearby, we stopped off at a stand to watch a woman expertly fold lotus petals into flowers for offering at one of the many Buddhist temples and sites throughout the city. We tried our hands at one ourselves shortly before. Joe was surprisingly good at it, putting to rest the claim made by one of the other men that his hands were too big to properly fold.

Next up was Wat Pho, a temple made famous by the giant reclining gold Buddha that resides in one of its’ structures. We were not allowed inside the buildings at night but had visited earlier in the day so we didn’t feel like we missed anything. In fact, the tranquility and silence without the crowds and the beauty of the lights illuminating the buildings was much more enjoyable.

After leaving our lotus flower offering at the temple, we made the quick walk to a nearby rooftop bar. With the added weight of the many food courses we’d already consumed, we wheezed up the 5 floors and stumbled out onto a cool, breezy view of the river below, Wat Pho and the grand palace behind. It was stunning, and for some reason, empty. We sipped our beers and watched the city glow around us, marveling at how beautiful it all was. 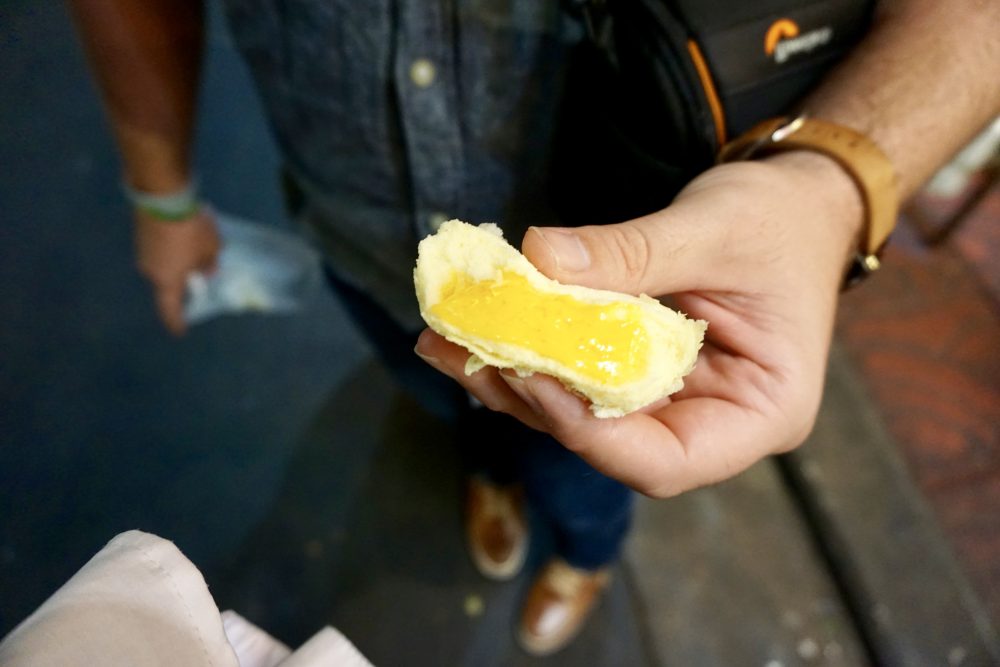 Steamed to the point of oozing, this is the mouth-watering hot lava custard bun.

After the peace of the temple and rooftop bar, it was time for the last food stop.

They took us to a restaurant famous for its’ Pad Thai where, even at 11:30 pm, there was a line spilling out onto the street to get in. It has been featured in newspapers from around the world and even has its’ own branded packaged goods to take him. In other words, it’s a place we tend to be wary of.

And we were right. We tried the traditional Pad Thai and a creamier one both encased in a thin film of cooked egg. It was okay, but in a city where the food is this good, we can’t for the life of us imagine why this would be a stop at all, let alone the last one. It was pretty disappointing.

After the last bites, we were loaded into our tuk-tuk and dropped off at our hotels. Aside from the pad thai, we loved the food, but honestly, we loved the tour even more. We learned so much about the history of food in Bangkok, and Olive was awesome. All in all, it was a great night, but we hope they replace the pad thai spot in the future. 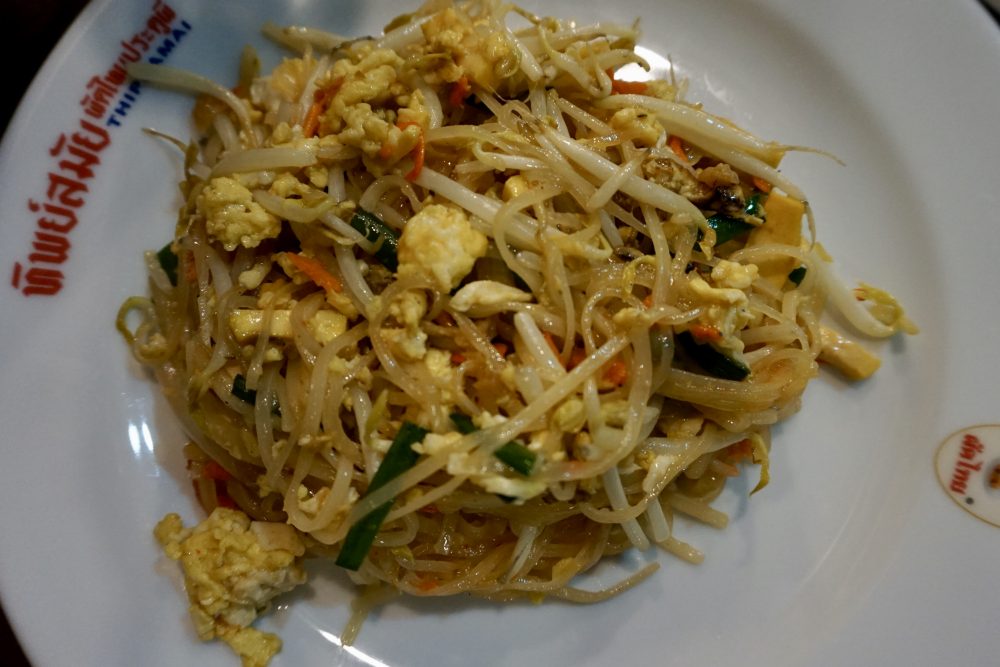 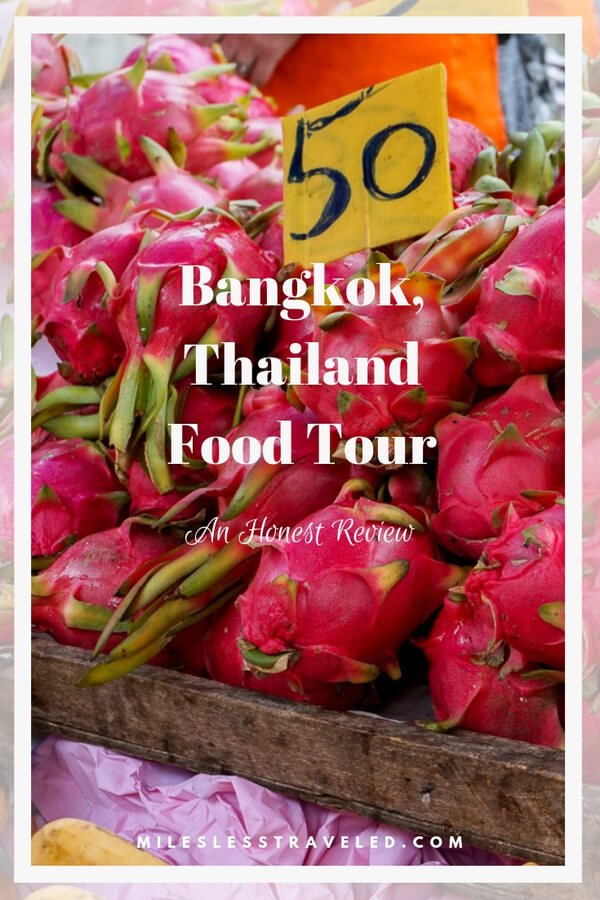 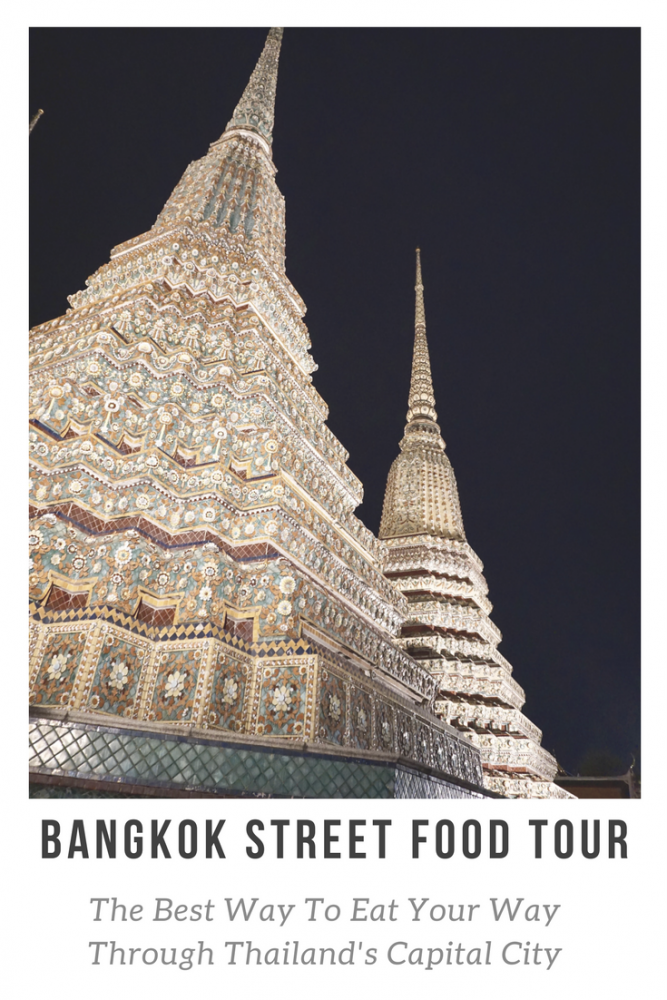