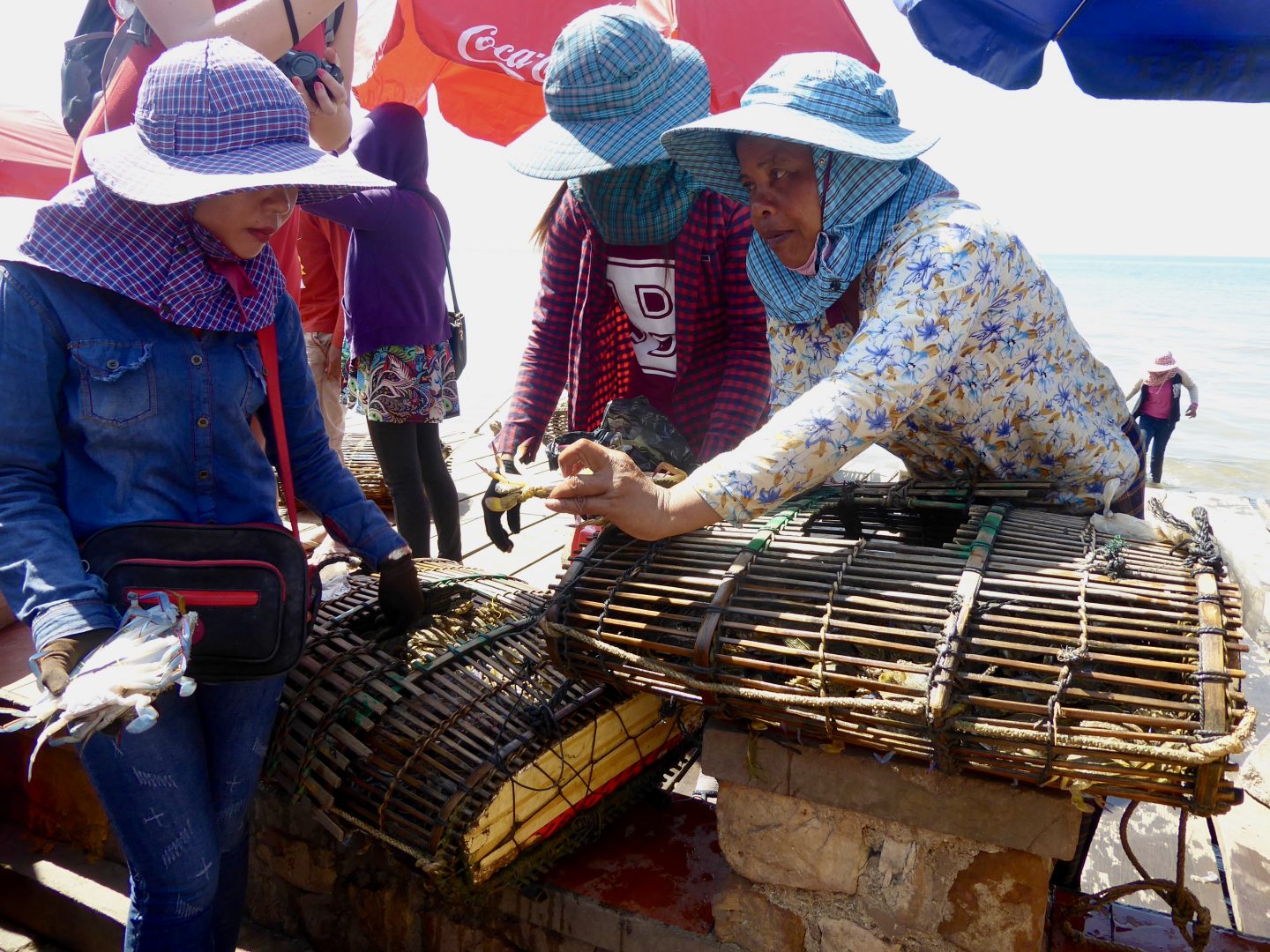 Joe and I have a habit of driving distances for food that would make many other people uncomfortable. In the beginning of our relationship, Joe lived in Hoboken, NJ – a quick hop through the tunnel from NYC. Except for the fact that it’s New York City, and nothing is ever quick when it comes to driving through a tunnel.

As two people moderately obsessed with eating, we began our love story over meals. So naturally, living outside of one of the best food cities in the world, it was not uncommon for us to follow and satisfy our impulse craving for meatballs at 11 pm on a Sunday. Or take a two-hour trip deep into Brooklyn for a slice of pizza.

It turns out we are no different when we’re traveling. We have a habit of doing minimal research about our destination before we get there. A few must sees and stopping points are enough to get us there than we let the rest work itself out upon arrival. Combined with our weird food obsessions, we often let the route follow our stomachs.

After running a half marathon in Cambodia, it led us to Kep, a small seaside town on the Southeastern coast of Cambodia in the Kampot province. This area is fast becoming world-renowned for two things: crabs and peppercorns, a pairing that has delightfully been combined in a mouth-watering dish best experienced at the original marketplace.

Tourists know about it, its not totally off the beaten path, though in our eyes it still seemed pretty undeveloped. We stayed in the riverside town of Kampot, and while this story focuses on the beautiful day we spent eating crab in Kep, about two hours South, there is loads to do without every leaving Kampot.

There’s a paved road to get to Kep and a smattering of resorts and guesthouses, but that’s about it. You will find the standard carts selling seashell trinkets and t-shirts, but right behind that you still find local fishing families pulling crab straight from the sea in large woven traps.

We walked up to one, seeing her pull it out of the water seconds before, and timidly stood to the side while a group next to us expertly haggled. Moments passed and a man standing next to us engaged us in conversation. “I hate seeing tourists ripped off,” he said. “Let me talk to them.” We were too confused and overwhelmed to argue. Besides, he had already started spit firing conversation in Khmer with the woman behind the basket.

Turns out this man’s name was Lee, and we were on our way to spending the rest of the day with him and his family. Lee was born in Cambodia, but moved to Australia almost 40 years ago after surviving the Khmer Rouge genocide and has never left. He’s a retired chef, and owned his own Thai restaurant in Melbourne for 30 years.

After haggling our crab down to what I am sure was still more than he paid, we obediently followed him to the next stop: the unsung genius who proceeded to transform our wriggling little monsters into a seafood feast of pure deliciousness. This man stood behind two portable wood-fired burners, each with a large steel wok set on top.

After adding fresh wood kindling and letting the wok heat, he tossed our crabs onto the pan with a generous dousing of oil. Within minutes, he had added strings of the fresh green peppercorns famous in this province and a chili pepper sauce to our now bright red crabs and handed it over in a giant styrofoam container. Two more containers filled with white rice later, and we were settled into a table under the shaded tarps of the market with Lee and his two young cousins. As gusts of wood fire smoke swept over us, we chatted with him about food, family, and everything in between.

There was something so familiar about Lee, we immediately liked him. Maybe it was the fact that he had driven the roughly 3 hours that morning just to eat crab, or that he was going to drive another hour or so further the next day for a lunch spot he just had to try. Whatever it was, we loved it.

Lee offered to take us back to Kampot, sent our tuk-tuk on it’s way, and we had the privilege of spending the rest of the hot and sunny day being driven around the province in a cool air-conditioned car. They switched to English love songs as soon we got in the car, and before we knew it we were heading up the road listening to Eric Clapton’s “You Look Wonderful Tonight” and listening to Lee laugh and joke with his family in the car, translating for us on occasion.

We visited his hotel for the night, a community run bungalow site with stilted huts in the water that he supported to make sure the money was going directly back into the community. He cared deeply for his country and it’s people, something that came through continuously throughout the day.

Lee used to stay in hotels, he said, but he saw how tourism was benefitting a few rich and leaving the rest of Cambodia in poverty. Now, he opted for places like this one, where every dollar goes right back to the people who live there.

Every time we thought we were too full to eat more, Lee stopped off somewhere where we dutifully ate more.

Back in Kampot, we made a quick pit stop off at a little house on the side of the road for Lee to order cakes – 130 of them to be exact. This was the last place in Kampot, he explained, that made them in the traditional way, passed down by her grandmother.

The cakes are available for pre-order only. There’s no storefront–they chatted about the order in the driveway–but this simple facility and lone woman operation is famous among locals for being the best sweet shop in the region. Lee said that people often order these by the 100’s when they are going back to visit the states.

The cakes were unreal.

Wrapped in a special type of palm frond that grows around the brackish waters of the river, coconut and sesame seeds are placed inside with sugar and then grilled. The result is a slightly sticky, sweet, flattened pancake reminiscent of a coconut macaroon but SO much more. We stood in her driveway and devoured every delightful bite, not hesitating to lick any small remains off of our fingers.

Piling back into the car, we started the drive up to a spot on the nearby river that’s popular for locals to hang out and swim. When entering, we paid a small fee of a few dollars and Lee asked what it was for. “Nothing,” the guard laughed. “So what am I paying for then,” Lee said jovially and they both roared into laughter. It was a bit infectious, Joe and I were giggling in the back seat long before Lee translated it for us. Turns out, the guards were right. The spot was nothing except a few stalls selling tourist food, so we took a few pictures and headed out.

On the way back to town Lee asked his young cousin to pull off on a side road, he wanted to show us something. We slowed down to navigate the pothole-riddled dirt road along the river and looked out at what used to be Lee’s property. It was farmland with fruit trees dotting the green grass overlooking the river and surrounding mountains. He had bought it to make a home there, he told us, but had sold it a few years back when he realized his family in Melbourne would not come back.

Lee looked out the window when he relayed their response to him. “What are you crazy, they said, after living through all the suffering in the Paul Pot era you want to go back?” He smiled softly to himself and we did not know what to say so we all said nothing. Lee did not linger on it, instead taking us to see the new bungee jumping, flying fox, and kayaking spot they had set up right down the road which had increased his property value right after he sold it.

We stopped by his neighbor’s snack stand on the side of the road, where he was able to scour 2 durians for $20/piece (the real Cambodian ones aren’t cheap, he explained). He bought us fresh coconuts that they split in two, and we scooped the delicious white meat out while they chatted and laughed in a language we didn’t understand. We found a puppy to play with and entertained ourselves until thanking them with the only Khmer word we knew, much to their delight.

After all that, they simply dropped us off at our hotel doorstep with nothing more than well wishes and a sweet thank you for spending the day with them. We don’t know his last name or have any way to contact or thank him, he’s gone from our life.


Lee is the kind of person who’s infectious.

We deducted from our conversations that Lee had been a teenager when the Khmer rouge inflicted the deadly genocide of the 70’s. It is beyond imagining the kinds of horrors he must have experienced. And it only added to the mind-blowing fact that Lee appeared happy. Not just happy, but genuinely in love with life and everyone in it happy.

If he was not making us laugh or buying us treats, he was making his family laugh or bringing a smile to the face of whoever he was buying food from. He was just pure joy, and you could not help but feel happy when you were with him.

We don’t know why he adopted us that day, but we were immediately glad he did. He simply stepped in and became a volunteer guide, and quickly, a friend. It was the kind of kindness that makes you question everything and wonder what else you’ve been missing when you’ve been side-stepping those conversations with strangers. Also, it gets lonely on the road, and these moments with strangers can make all the difference some days.

The crab ended up being one of the best meals we’ve ever had, but the day turned into one of our favorite travel memories of our trip around the world simply due to the kindness of a stranger.