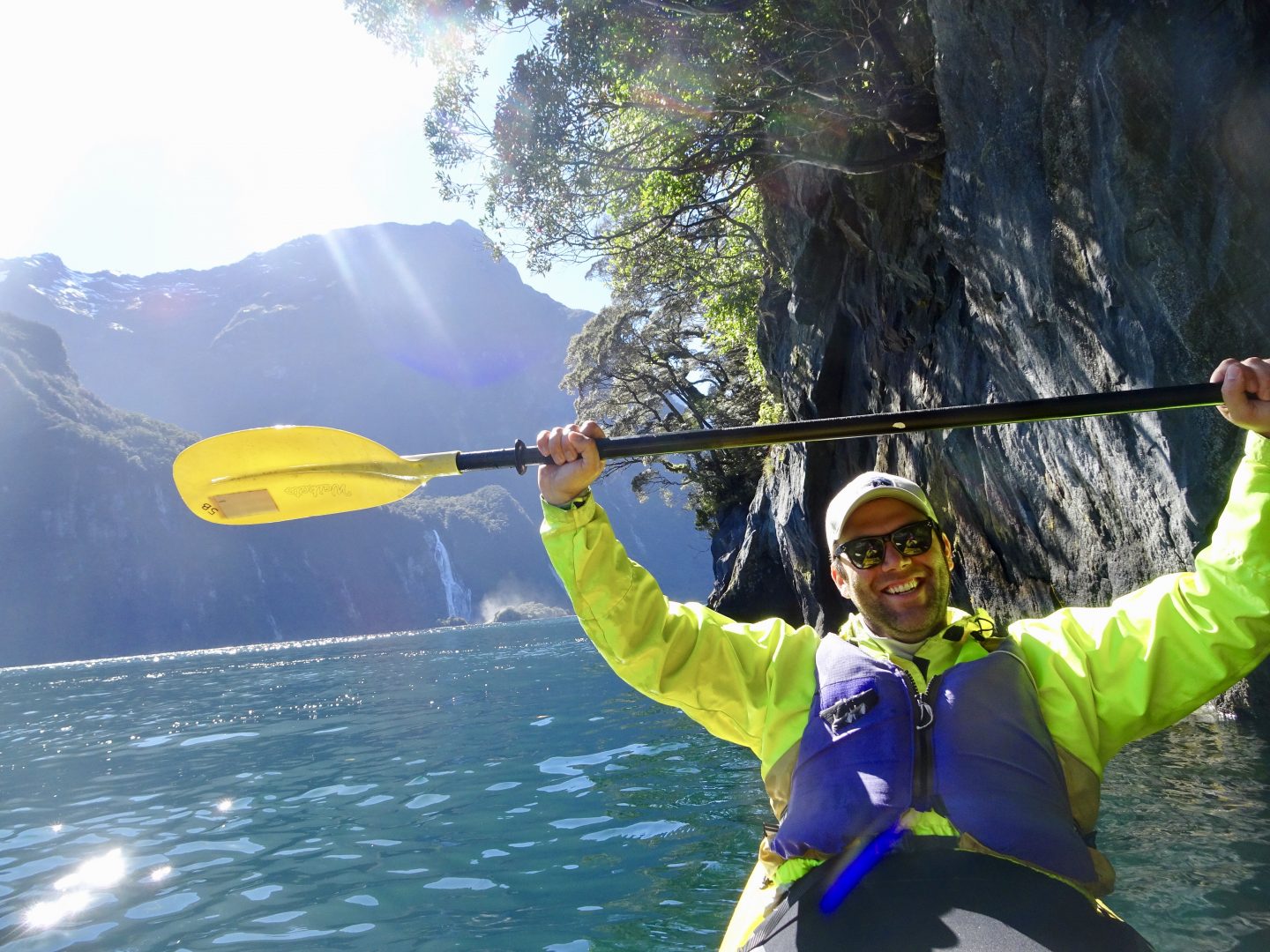 The In’s and Out’s of Kayaking Milford Sound

Before getting to the actual kayaking of Milford Sound, let’s clear something up. You’ll hear many things about Milford Sound before visiting, much of which is true, but one of which is an old, old lie. It turns out that the Milford Sound is not really a sound at all. It’s actually a fjord, but by the time they realized the error of their ways, the name had stuck – so Milford Sound it remains. It’s no secret, I think it was one of the first things they told us on our tour, but the surprise of it all! Who even knows what’s real anymore?! Mind you we have no idea still what the difference is between a fjord and a sound in spite of how much time we’ve had to look these details up, but the sting of the truth remains.

In spite of this deceit, we were able to take in the awe-inspiring beauty of our surroundings after we made the gorgeous but very intense drive along Milford Road. There are many different ways to see the sound, including, in true New Zealand death chasing fashion, base jumping off peaks towering over the crystal clear waters. If you are looking for a more sane approach, there are really only three options: a cruise, kayak trip, or flying, all of which vary greatly in price, distance, and time spent out on the water.

When Kayaking Milford Sound, you will need to book a tour.

Taking a recommendation, we booked the Sunriser classic kayak tour option offered by Rosco’s, the last of the small privately operated kayaking businesses still afloat (ya get it?). We can’t say enough good things about them (Note: this post was in no way sponsored by them, we just had a great experience and want to shout them out for it).

Not only did we get the most helpful instructions on kayaking that we had ever received, but were also equipped with a dry bag to hold our belongings and the most unfashionable striped and neon colored thermals to wear under our rain gear. Joe had tight bright green ones on that I am just dying to post a picture of but sadly, a promise is a promise. This particular excursion was listed as moderate, with options also ranging from easy to very difficult depending on interests and experience level.

The sound gets an average of roughly 180 days of rain each year, so it was to our amazement and our guides’ that we set out on a clear, bright, sunshine filled morning without a single cloud to be seen against the backdrop of an impossibly blue sky. After a lengthy introduction to the sound and instructions on how to navigate the busy and potentially volatile waterway, we eagerly set out to explore. 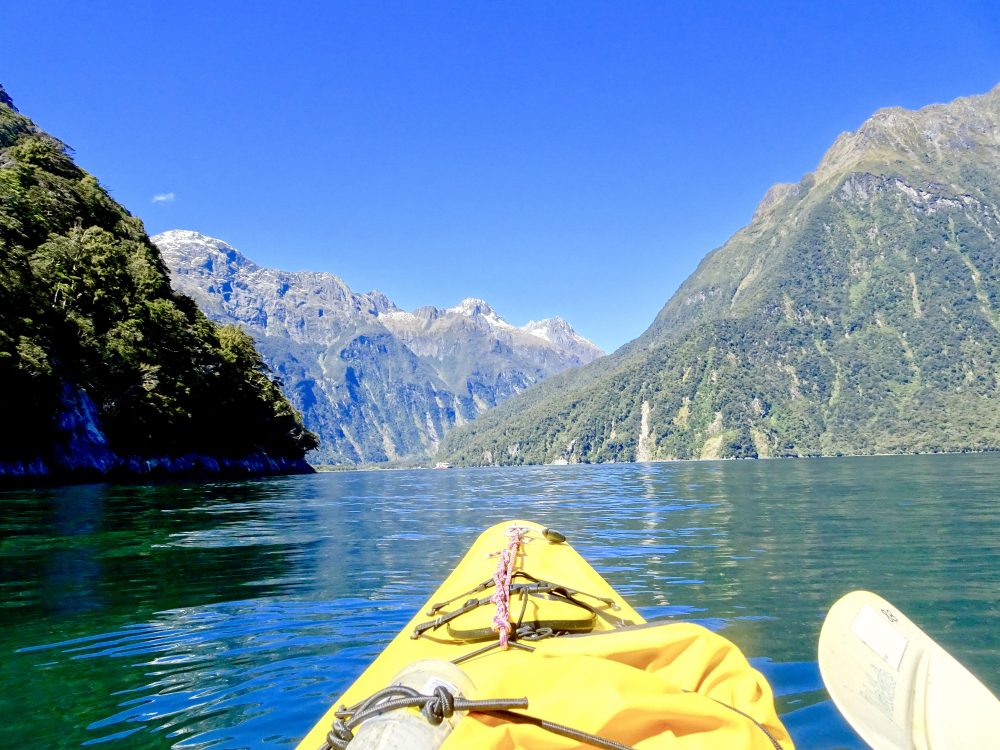 Our guide, Toby, was a very young and energetic New Zealander who was working the summer seasons in the outdoors. The year before he had led multi-day rafting trips In Kaikoura, and was on a trip when the earthquake that decimated the region hit. The impressiveness of mother nature, as he put it, must be respected.

It turns out the other 6 in our crew of 8 were all German, 4 of which knew each other and the other 2 a mere coincidence. So the Germans, Toby, and us set out to discover what has long been referred to as the eighth natural wonder of the world.

And what a wonder it is.

We were instantly dwarfed by the surrounding cliffs but due to their steepness, experienced little shade or overhang from them. It was immediately apparent that it’s all true, Milford Sound is mind blowingly beautiful.

From our first glimpse, it had our heads spinning. Jagged peaks soar from the reflections peering back at them from the deep, dark, and piercingly blue water that lies below them. There is a crispness to the air, a feeling of cleanliness that makes you involuntarily inhale deep gulps of it until you can feel the weightlessness of it.

What you see when kayaking Milford Sound.

As we paddled, we tried estimating how far out one of the year round waterfalls was flowing into the sound, the highest of which got to 4 km. It was 9. Toby explained this was called the “dwarfing effect” caused by being surrounded by such extreme heights. Normally, the majority of us do not encounter that kind of elevation in our day-to-day lives, so our entire perception is thrown off and we can not tell distance.

What remained unclear is if we were supposed to be comforted by the fact that we were now floating on water hundreds of meters deep without any grasp on our perceptive reality. However this is New Zealand, you show no fear in the face of the people who live in some of the furthest removed and rugged landscapes on Earth. So we shrugged, giddy with beauty and the delight of this newest magic trick it was playing on us.

Not only was it not raining on the day we paddled around, but it had not rained for a few days. This meant that the tens of thousands of waterfalls that often flow freely off the cliffs into the fjord were missing, but it also offered a rare glimpse of clear water down to the bottom. Normally, the dark fresh water sits atop the clear saltwater blocking it from view, but on that day, we could see EVERYTHING. 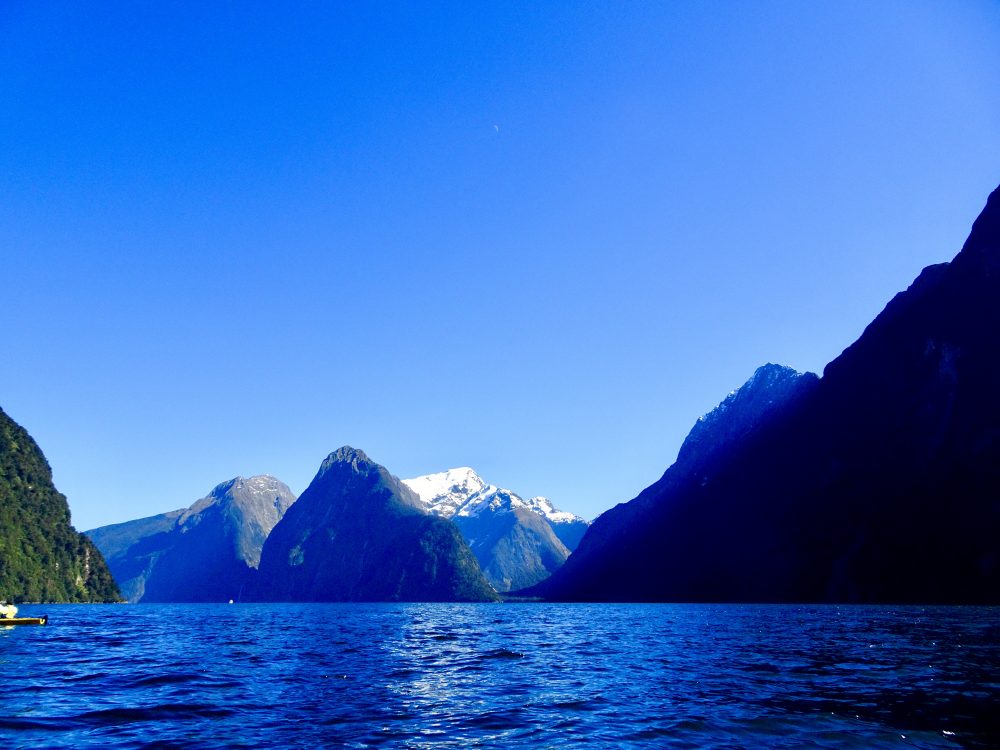 Before setting off, Joe and I had an unofficial “we really want to see” checklist as follows: penguins, dolphins, and seals.

It was hard to tell which way to look. I imagine our heads appeared to be on a constant swivel, rotating between staring into the depths to the water out ahead or the beautiful scenery that rose up around us. J It wasn’t long before we had our first stop off to visit a temporary Fiordland Penguin resident, hanging for the breeding season with its mate. We paddled up to the rock. It backed away a bit, but remained in view, turning around and striking poses as we all cooed and snapped pictures. Check one.

Eventually we had to cross this very busy and wide waterway.

We slowly wove our way along one side, coming together, or rafting up, from time to time for Toby to tell us history and facts about the sound, and continue getting to know us. Rafting up happened like this – Toby called to us, and gracefully pulled into position at the front while we inelegantly tried not to tip each other to line up in a neat little row while gripping the sides of the kayaks next to us.

After a time, we began to cross the sound, a not so easy feat when faced with the continuous cruise ships and the waves they create in their wake, along with the fact that it is just really wide and far to get from one side to the other (though of course we did not realize this at the time due to the aforementioned “dwarfing effect”).

We gripped our paddles and began the journey out, trying to mind Toby’s clear instruction to stick together so we were an obvious block of color to be avoided by the boats barreling past us.

About halfway across, we spotted the first fin of a bottlenose dolphin. Soon there were many, splashing a few feet away from us. We were in shock, our paddles raised off the water while we stopped and stared in awe.

One thing you can not quite grasp from a boat or beach looking out at dolphins is their size. They are big, up to 12.5 ft big according to NOAA, but are also so graceful and playful that their was simply no room for fear when we approached them.

Toby raced them with his much more efficient kayaking abilities while the rest of laughed and watched as they jetted between our kayaks and around us, one taking the time to travel directly underneath each of us with the white of its belly skyward so we could take it all in. Check two. 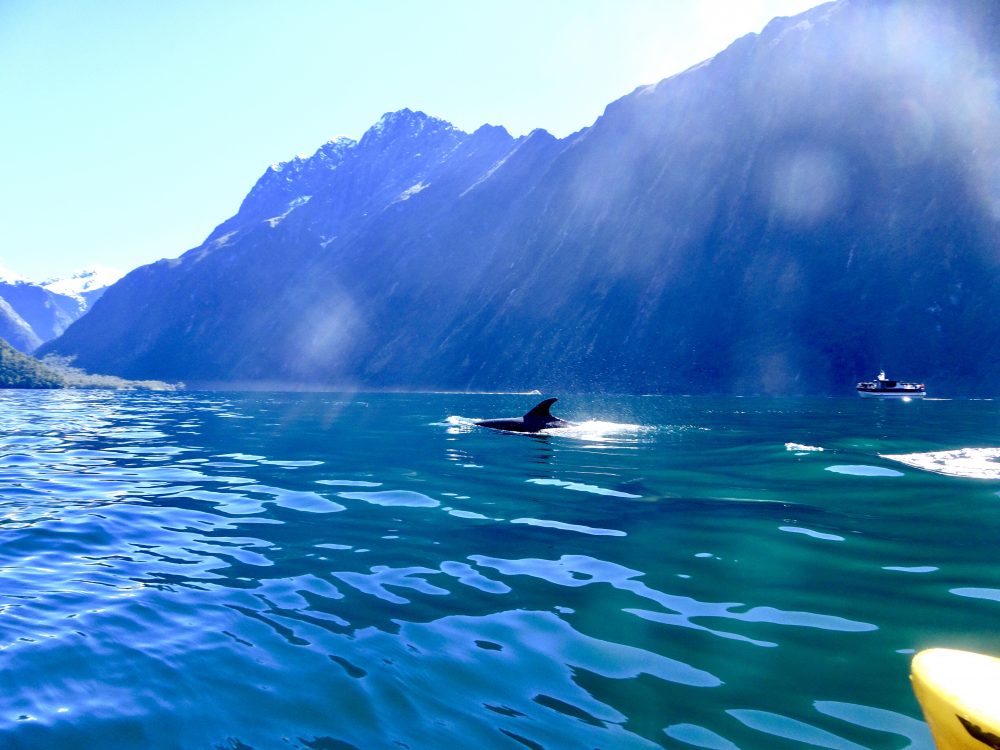 It was about this time that we hit the halfway point, and Joe and I were starting to get tired.

Our kayak was not the light, buoyant vessel it felt like in the beginning with but now a lugging, hulking giant that we did not quite know how to operate. We were mostly quiet, enjoying the shade and reserving energy for the long trip back.

This was also around the same time that we gratefully acknowledged choosing the moderate trip seeing as how this was closing on the difficult to very difficult range for us. (Another thing to note about New Zealanders, their perception of easy and hard vary GREATLY from what Joe and I had in mind a high percentage of the time).

Finally it was time to head back.

We took a spin around the closer of the two year-round waterfalls, Bowen Falls, and spent the next hour or so paddling home. As it turns out, the seals usually spend their time closer to the open ocean and sadly did not reveal themselves on this trip.

As we pulled ashore and crawled out of our kayaks, we were exhausted, sun burnt to a nice little crisp, and so so happy. The experience, the sounds, the smells, the sites, the thrill of it all, the DOLPHINS SWIMMING UNDERNEATH OUR DAMN KAYAKS — these are not things to be taken lightly or quickly forgotten. The sheer beauty, and the magical way it made our insides feel, was worth the whole trip in and of itself. We are in a debt of gratitude to the world for creating such a place, and being alive in a time where we could see it just like this. 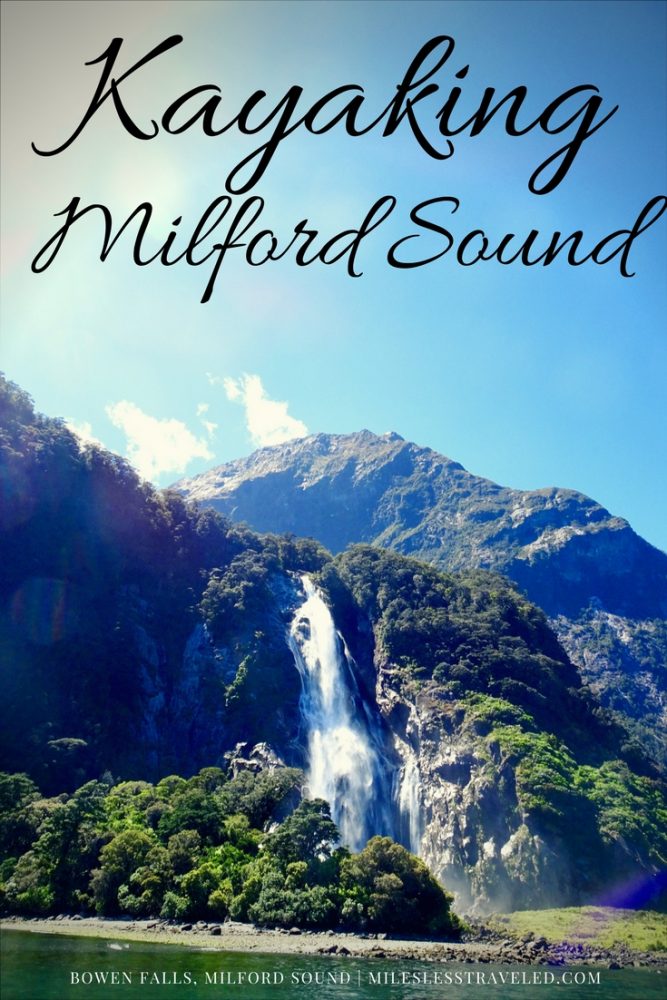 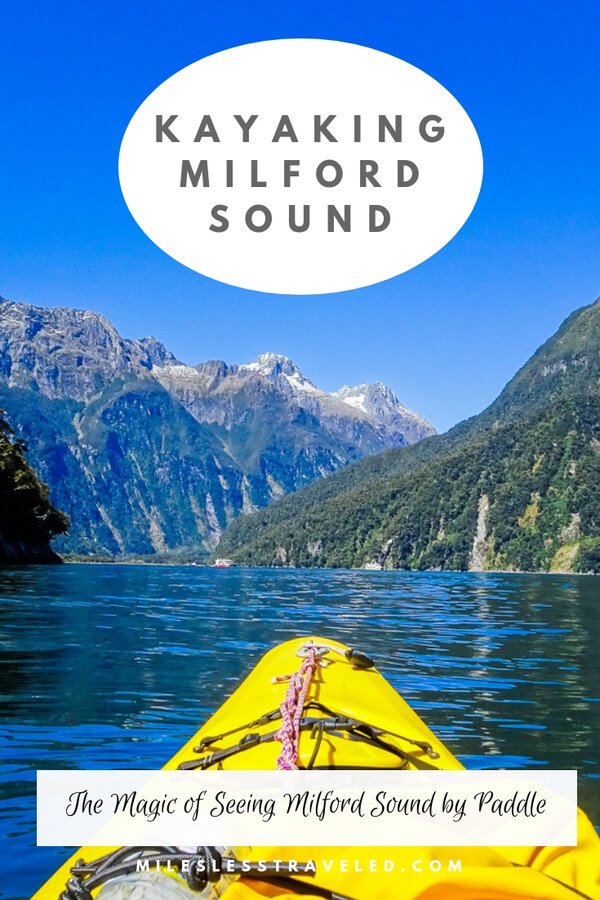