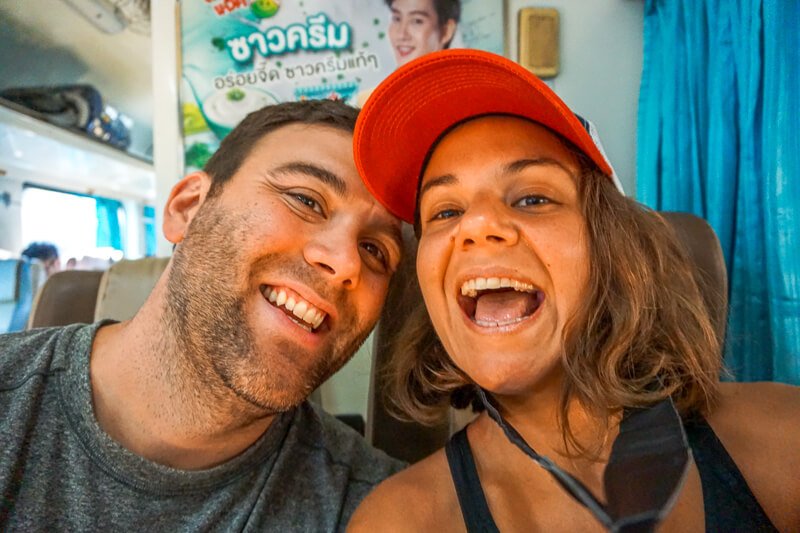 I’ve always loved train travel. The romance of it, the ease and security of a rocking train carriage, it’s so comforting and nostalgic for me. I missed it in Cambodia, Indonesia, and Vietnam, and so jumped on the chance to take a very long one as soon as we got to Thailand. The Bangkok to Chiang Mai train was the perfect opportunity to get me back into my favorite mode of transportation while seeing a huge chunk of the country.

Chiang Mai was an impulse side trip for us that we booked after finding out that a friend would be there when we were in Thailand. Initially, we weren’t sure if we wanted to make the trip up. Ultimately, we loved this relaxed city and the beautiful waterfalls that surrounded it.

How to Get from Bangkok to Chiang Mai

There are several different ways to get between these two major cities in Thailand. 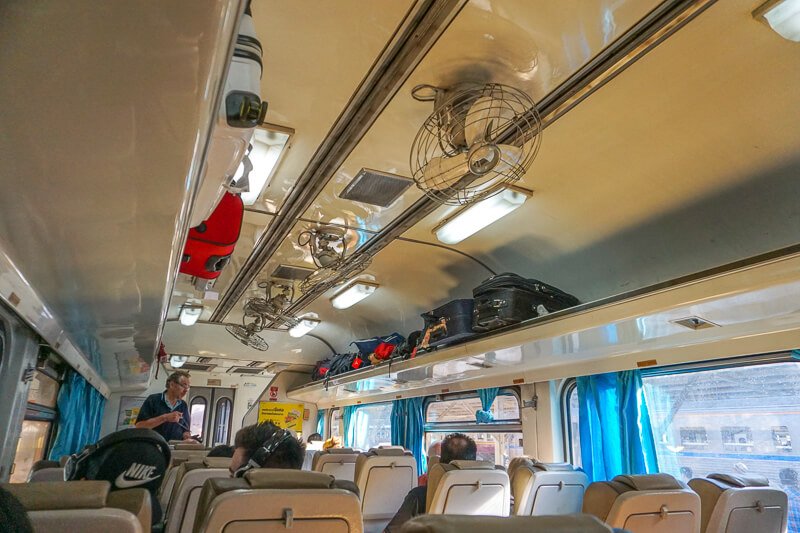 The inside of our air-conditioned, second class, train car

The Bangkok to Chiang Mai Train

I became increasingly scared of transportation while we were traveling in Southeast Asia. The craziness of the drivers I witnessed firsthand combined with the shockingly high accident rates in the statistics made me hesitant to hop on a bus, and the higher than average airline incident rates added to my already healthy fear of flying. The train option in Thailand was a welcome relief.

We took the express train from Bangkok to Chiang Mai during the day. After some consideration, we decided that since we were in no rush, there was no need to force an overnight in a cramped sleeper car. In my experience, it’s unlikely we would get any sleep in that setting anyway. So we booked the day trip in normal seats and watched Thailand drift by outside our window.

The train is not the cleanest in the strictest sense of the word. It’s got dirt caked in all the cracks and streaking the windows, but once you get past the weird small and grimy bathroom, it’s actually one of the nicest train rides I’ve been on. The tracks wind through the countryside and small towns, dipping into lush green valleys and coasting astride hills covered in rainforest. The train stops occasionally, but it just adds to the loveliness of seeing this beautiful country.

I will note that this is not for the squeamish, however. There were plenty of cockroaches strolling along the aisles to keep us company, especially when the sun went down. Don’t worry though, it’s the wee ones, mostly.

They mopped and changed the garbage regularly, as well as washed the windows which confused me greatly as they remained slightly brown throughout the trip. And the bathrooms had toilets AND toilet paper, pretty uncommon luxuries in this part of the world.

They also offered water, coffee and other drinks, snacks, and food at mealtimes – all included in the price of our roughly $30 ticket for second class seats.

We saw endless, rolling, bright green rice fields. Little villages with clusters of homes and the people who likely lived in them. Old, crumbling structures overrun with monkeys and New gleaming temples missing the usual throngs of tourists that overwhelm them in Bangkok. There was a giant Buddha set atop a hillside, gleaming in a gold so vibrantly that it contrasted the lush green around it. Once in a while, a small mountain range would line the horizon. The 4-5 hours closer to Chiang Mai, you pass through several national parks. 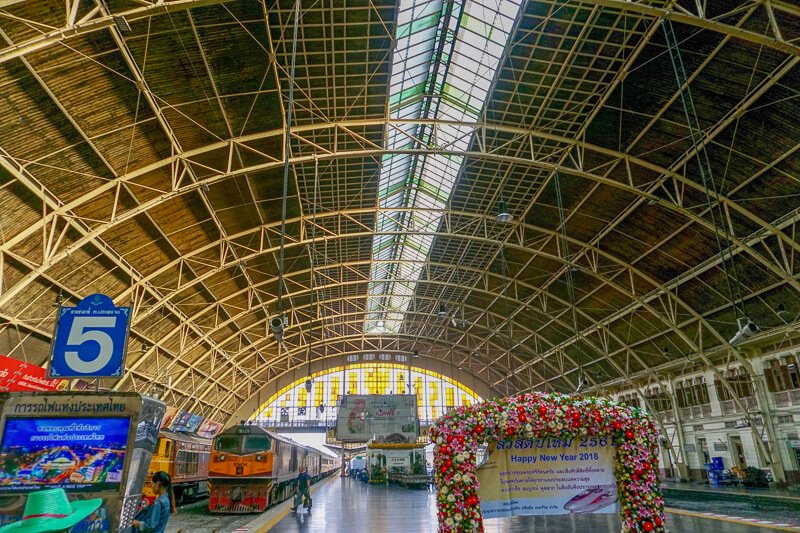 The Logistics for Taking the Bangkok to Chiang Mai Train

Our train was scheduled to leave at 8:30 am but ended up pulling out of the station at 9:30, pretty standard for SE Asia transportation in our experience. It was supposed to take 11 hours, and ending up taking 11 and a half hours getting us in at 9:00 pm.

The Chiang Mai train station is located about a 5-10 minute drive into the old city, the main tourist center here, however, there are plenty of rides available when you arrive.

The way back from Chiang Mai to Bangkok is pretty much the same. We left on time and arrived back in Bangkok that night. This train was cleaner, had squat toilets instead of regular ones (which I honestly think work way better on trains), and fewer cockroach sightings. This could have also been due to the fact that we were in the middle of the car this time instead of in the last row next to the trash.

Aside from the cockroach situation–which honestly was a bit of a struggle for me–I am so glad we took the train. After months of being on insanely driven buses whizzing down potholed roads at the speed of light (not to be dramatic) and hopping on turbulence filled budget air trips, I felt like we were living in luxury. It was also by far the most we’ve been able to see a country. I spent the majority of the trip with my eyes fixed on the window waiting for a new beautiful site to creep into view. It did not disappoint. 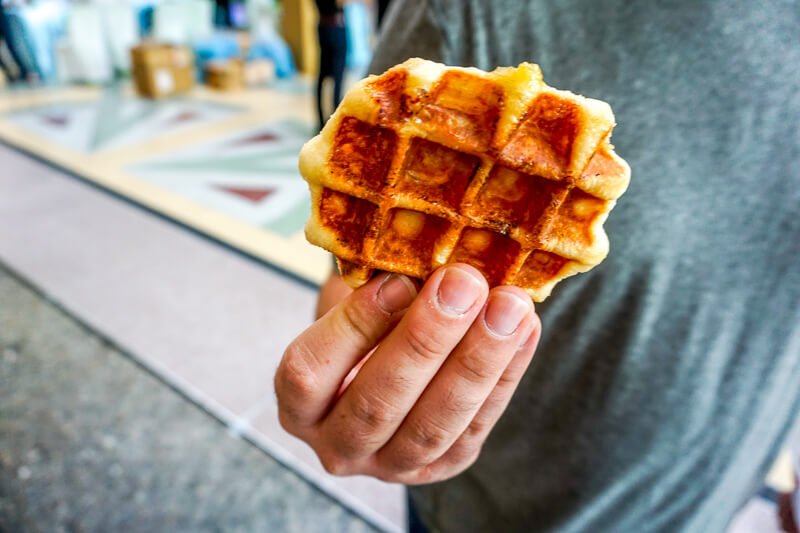 Practical Tips for the Bangkok to Chiang Mai Train

1.Book in advance – Train tickets do sell out in Thailand, especially for the popular trips and the higher classes. 1st class can sell out months in advance so if that’s important to you, make sure to snag your tickets as soon as you know your travel dates.

2. Booking online is an option – sort of. You can not directly buy your tickets, but you can pay someone to physically go to the counter and purchase it for you. The internet favorite for this (and same one we used) is 12go.asia/en. After they purchase the tickets for you, you go to their office to pick up your train ticket. The other option is to book through a travel agent, though of course all of this comes at a higher cost than going to the station yourself.

3. Unlike what we saw people write about it on the internet, we found the Hua Lamphong train station in Bangkok is small and manageable with loads of friendly people to help get you to where you need to go. There is air-conditioning, semi-decent bathrooms, and solid snack options. There’s even a vending machine for t-shirts and underwear just in case you forget to pack them. The Chiang Mai train station, while smaller, is equally filled with convenient food and ammenity options.

4. If possible, request to sit away from the garbage cans. This may or may not have been the reason for the increased cockroach encounters on the first train trip, but I feel pretty certain it didn’t help.

5. Some trains are newer than others. I do not think there is much of a choice in which ones you get, but we were told the sleeper car overnight trains (train 9 or 10) are pretty new and nice. For the day rides that we took, train 7 was the way up which was less nice than train 8 on the way back to Bangkok.

6. The day trains offer only second class or third class tickets. If you want 1st class, you need to book an overnight train.

7. Backing makes traveling by public transportation a total breeze. Make sure you have the right pack for you, especially important as a woman. 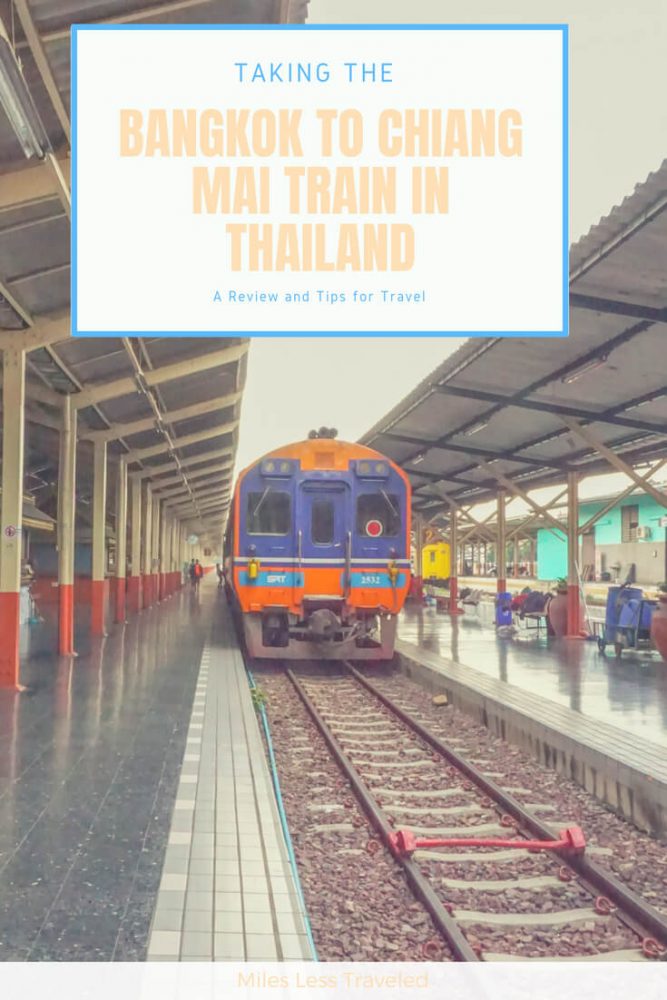